In order to simulate a normal distribution from a set of uniform variables, there are several techniques:

My question is: which is computationally more efficient? I would think
its the latter method – but most of the papers I read use Box-Muller –
why?

The inverse of the normal CDF is know and given by:

From a purely probabilistic perspective, both approaches are correct and hence equivalent. From an algorithmic perspective, the comparison must consider both the precision and the computing cost.

Box-Muller relies on a uniform generator and costs about the same as this uniform generator. As mentioned in my comment, you can get away without sine or cosine calls, if not without the logarithm:

The generic inversion algorithm requires the call to the inverse normal cdf, for instance qnorm(runif(N)) in R, which may be more costly than the above and more importantly may fail in the tails in terms of precision, unless the quantile function is well-coded.

To follow on comments made by whuber, the comparison of rnorm(N)and qnorm(runif(N))is at the advantage of the inverse cdf, both in execution time: 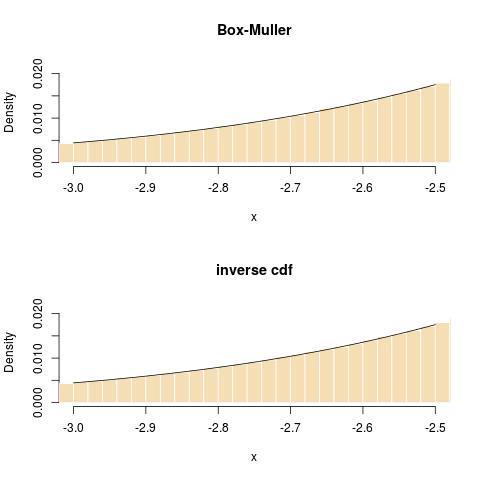 Following a comment of Radford Neal on my blog, I want to point out that the default rnorm in R makes use of the inversion method, hence that the above comparison is reflecting on the interface and not on the simulation method itself! To quote the R documentation on RNG: