I understand that we use random effects (or mixed effects) models when we believe that some model parameter(s) vary randomly across some grouping factor. I have a desire to fit a model where the response has been normalized and centered (not perfectly, but pretty close) across a grouping factor, but an independent variable x has not been adjusted in any way. This led me to the following test (using fabricated data) to ensure that I’d find the effect I was looking for if it was indeed there. I ran one mixed effects model with a random intercept (across groups defined by f) and a second fixed effect model with the factor f as a fixed effect predictor. I used the R package lmer for the mixed effect model, and the base function lm() for the fixed effect model. Following is the data and the results.

Notice that y, regardless of group, varies around 0. And that x varies consistently with y within group, but varies much more across groups than y

If you’re interested in working with the data, here is dput() output:

I note that the intercept variance component is estimated 0, and importantly to me, x is not a significant predictor of y.

Next I fit the fixed effect model with f as a predictor instead of a grouping factor for a random intercept:

Now I notice that, as expected, x is a significant predictor of y.

What I am looking for is intuition regarding this difference. In what way is my thinking wrong here? Why do I incorrectly expect to find a significant parameter for x in both of these models but only actually see it in the fixed effect model?

There are several things going on here. These are interesting issues, but it will take a fair amount of time/space to explain it all.

First of all, this all becomes a lot easier to understand if we plot the data. Here is a scatter plot where the data points are colored by group. Additionally, we have a separate group-specific regression line for each group, as well as a simple regression line (ignoring groups) in dashed bold: 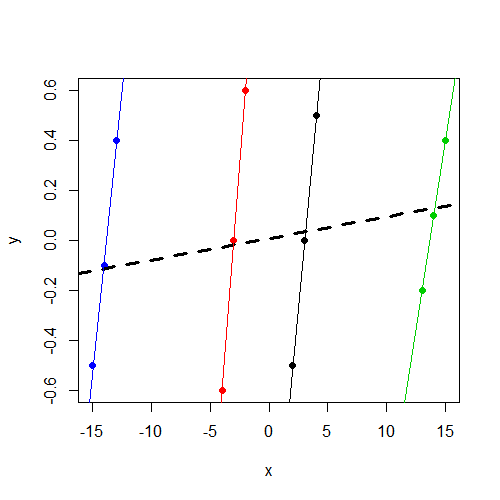 What the fixed-effect model is going to do with these data is fairly straightforward. The effect of x is estimated “controlling for” groups. In other words, x is first orthogonalized with respect to the group dummies, and then the slope of this new, orthogonalized x is what is estimated. In this case, this orthogonalization is going to remove a lot of the variance in x (specifically, the between-cluster variability in x), because the group dummies are highly correlated with x. (To recognize this intuitively, think about what would happen if we regressed x on just the set of group dummies, leaving y out of the equation. Judging from the plot above, it certainly seems that we would expect to have some high t-statistics on each of the dummy coefficients in this regression!)

So basically what this ends up meaning for us is that only the within-cluster variability in x is used to estimate the effect of x. The between-cluster variability in x (which, as we can see above, is substantial), is “controlled out” of the analysis. So the slope that we get from lm() is the average of the 4 within-cluster regression lines, all of which are relatively steep in this case.

What the mixed model does is slightly more complicated. The mixed model attempts to use both within-cluster and between-cluster variability on x to estimate the effect of x. Incidentally this is really one of the selling points of the model, as its ability/willingness to incorporate this additional information means it can often yield more efficient estimates. But unfortunately, things can get tricky when the between-cluster effect of x and the average within-cluster effect of x do not really agree, as is the case here. Note: this situation is what the “Hausman test” for panel data attempts to diagnose!

Here are the coefficients for the simple regression model (the dashed bold line in the plot):

As you can see, the coefficients here are identical to what we obtained in the mixed model. This is exactly what we expected to find, since as you already noted, we have an estimate of 0 variance for the random intercepts, making the previously mentioned ratio/intra-class correlation 0. So the mixed model estimates in this case are just the simple linear regression estimates, and as we can see in the plot, the slope here is far less pronounced than the within-cluster slopes.

This brings us to one final conceptual issue…

Why is the variance of the random intercepts estimated to be 0?

The answer to this question has the potential to become a little technical and difficult, but I’ll try to keep it as simple and nontechnical as I can (for both our sakes!). But it will maybe still be a little long-winded.

Judging from the plot, it looks like the intra-class correlation in these data would be slightly negative. (What I am looking at in drawing this conclusion is the fact that there is a lot of variance in y within each cluster, but relatively little variance in the cluster means on y, so two errors drawn from the same cluster will tend to have a difference that nearly spans the range of y, whereas errors drawn from different clusters will tend to have a more moderate difference.) So your mixed model is doing what, in practice, mixed models often do in this case: it gives estimates that are as consistent with a negative intra-class correlation as it can muster, but it stops at the lower bound of 0 (this constraint is usually programmed into the model fitting algorithm). So we end up with an estimated random intercept variance of 0, which is still not a very good estimate, but it’s as close as we can get with this variance-components type of model.

So what can we do?

One option is to just go with the fixed-effects model. This would be reasonable here because these data have two separate features that are tricky for mixed models (random group effects correlated with x, and negative intra-class correlation).

Another option is to use a mixed model, but set it up in such a way that we separately estimate the between- and within-cluster slopes of x rather than awkwardly attempting to pool them together. At the bottom of this answer I reference two papers that talk about this strategy; I follow the approach advocated in the first paper by Bell & Jones.

Finally, we still have an estimate of 0 for the variance of the random intercepts, for the reasons I elaborated in the previous section. I’m not really sure what all we can do about that one at least without switching to some software other than lmer(), and I’m also not sure to what extent this is still going to be adversely affecting our estimates in this final mixed model. Maybe another user can chime in with some thoughts about this issue.