Hopefully someone on these forums can help me out with this basic problem in gene expression studies.

I did deep sequencing of an experimental and a control tissue. I then obtained fold enrichment values of genes in the experimental sample over control. The reference genome has ~15,000 genes. 3,000 out of 15,000 genes are enriched above a certain cut-off in my sample of interest compared to control.

In a previous ChIP-chip experiment, I found 400 genes that are enriched by ChIP-chip. Of the 400 ChIP-chip genes, 100 genes are in the group of 3,000 enriched RNA-Seq transcripts.

What is the probability that my 100 ChIP-chip genes would be enriched by RNA-Seq by chance alone? In other words, what is the most prudent way to calculate if my observed overlap between B and C (100 genes) is any better than that obtained by chance alone? From what I have read so far, the best way to test this is by using hypergeometric distribution.

If I sampled 400 random genes rom the big list of 15,000, then any 80 of these genes would be expected to be enriched by chance alone (1:5). The number of genes that are actually overlapping is 100, so this is just slightly better than by chance.

I also tried to come up with a solution using the dhyper or phyper functions in R (using what I saw in another post):
A=all genes in the genome (15,000)
B=RNA-Seq enriched genes (3,000)
C=ChIP-chip enriched genes (400)
Here’s the R input/output (adapted from a previous stackexchange post):

I’m not sure how to interpret these numbers. I believe 2.36e-36 is the probability of getting a complete overlap between B and C by chance alone? But this makes no sense, since that probability is much closer to 1:5. If I start with 15,000 genes, 3,000 will be enriched. Similarly, if I start with 400 ChIP-chip genes, 80 of them should be enriched in the RNA-Seq alone due to the 1:5 chances of enrichment in that data set.

What is the proper way to calculate the p-value, according to the hypergeometric distribution, for the overlap of B and C?

You are close, with your use of dhyper and phyper, but I don’t understand where 0:2 and -1:2 are coming from.

The p-value you want is the probability of getting 100 or more white balls in a sample of size 400 from an urn with 3000 white balls and 12000 black balls. Here are four ways to calculate it.

Here’s a picture of the hypergeometric distribution in this case. You can see that it’s centered at 80 (20% of 400) and that 100 is pretty far out in the right tail. 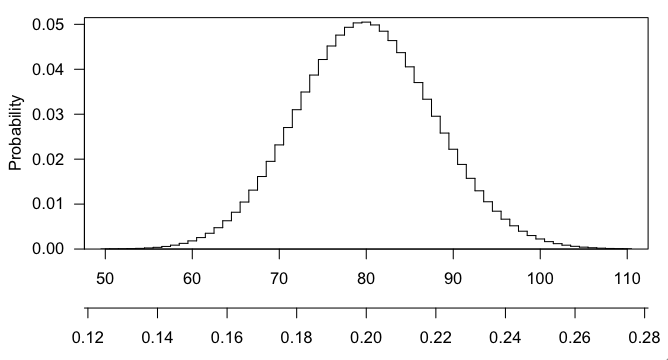