I create an autoregressive process “from scratch” and I set the stochastic part (noise) equal to 0. In R:

Then I ask R to fit an AR(1) process using the arima() function :

Why is R not finding ar1 = 0.9 (= phi) with overwhelming small standard error?

You have two problems–and one of them is interesting.

Without a noise term, the series is no longer stationary. Its value is increasing asymptotically, but definitely, toward 1: 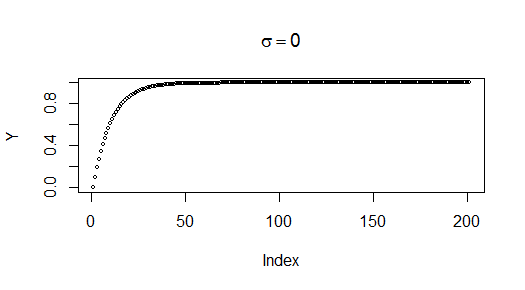 What, then, happens when we add just a tiny bit of noise? 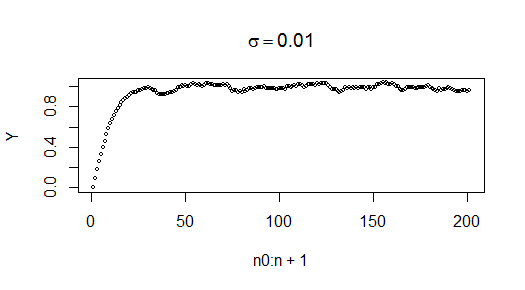 It’s still obviously not stationary–but the reason is that the initial values are inconsistent with everything that follows.

You need to remove a “burn-in period” during which the simulated values are starting to behave like the rest of the series will. Here’s what this one looks like when we strip out the first n0=30 values: 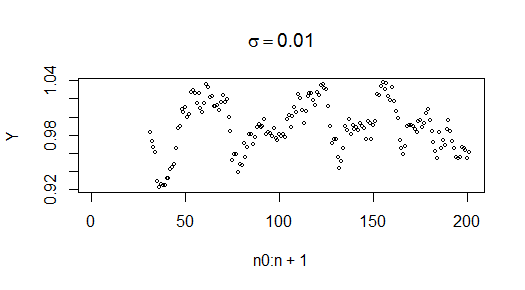 What does arima return?

I repeated this process 99 more times, producing 100 estimates of ϕ along with their standard errors. Here is a plot of those estimates and crude 90% confidence limits (set at 1.645 standard errors above and below the estimates): 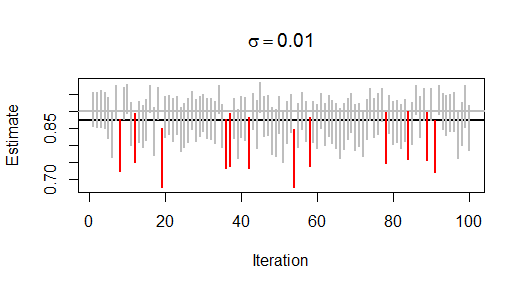 The horizontal gray line is located at ϕ=0.9 for reference. The red confidence intervals are those that do not overlap the reference: there are 12 of them, indicating the confidence level is around 88%, agreeing (within sampling error) with the intended value of 90%. The horizontal black line is the average estimate. It’s a little lower than ϕ, perhaps because after even 200 time steps the series still isn’t quite stationary. (One also doesn’t expect the distribution of the estimate to be symmetric: 1 is an important boundary and will cause the distribution to be skewed toward the smaller values.)

Here is the same study but with 2000 time steps in each iteration: 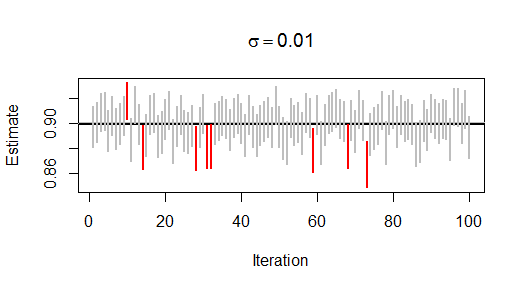 The bias in the estimate has nearly disappeared.

Another solution is to start generating the series at its asymptotic mean value (equal to cnst/(1-phi) in the R code below). But that requires knowing the asymptote, which might be harder to come by in more complex models, so it’s good to know about the technique of discarding the initial segment of a simulated series.

BTW, here’s a reasonably efficient and compact way to generate these datasets: