The paper in Science [1] infers change points in COVID
spread in Germany. The authors fit the number of daily cases assuming
one (red), two (orange), and three (green) change points. Every change
point adds two parameters to the model.

It is hard to believe that the three change points model capture some underling
physical reality missing in the one change point model. The conclusion that “three
corresponding change points are detected” is based on comparison of
leave-one-out cross-validation (LOO-CV) scores:

pymc3.compare(..., ic='LOO', scale='deviance') returns (d_loo is a relative difference and dse is a standard error of the difference in score between each model and the top-ranked model): 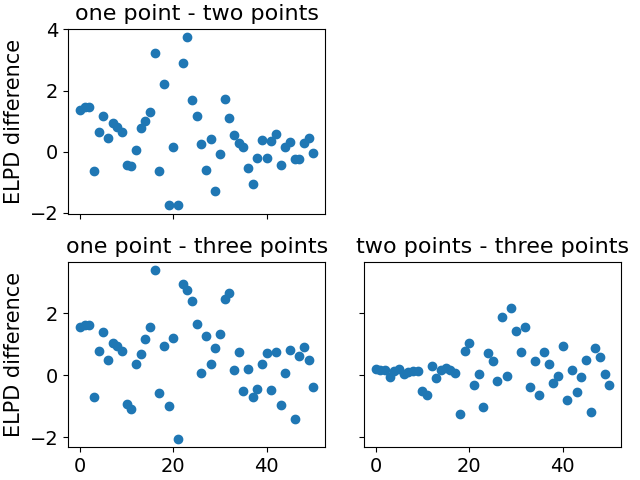 And I also plot a pointwise predictive accuracy: 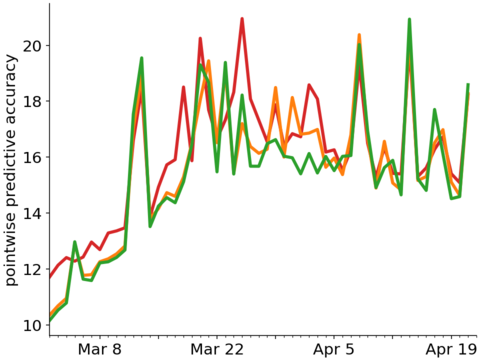 There is an eLetters exchange related to the paper [4] and a technical
report from the authors [5].

It is hard to believe that the three change points model capture some underling physical reality missing in the one change point model.

The fit with three change points is indeed more accurate

It is not hard to believe that a model with three change points will do better. A simple SIR model (which assumes homogeneous mixing of all people) is not an exact fit to reality. Those change points will help to make-up for that shortcoming (making it more flexible and able to fit a wider range of different curves).

However, you are right to doubt whether it captures a physical reality. A SIR model is designed as a mechanistic model. However, when it is not accurate enough, then it becomes effectively just an empirical model.

The underlying parameters may not necessarily represent some physical reality. (If you like you could fit a mechanistic model which has obviously not at all any physical reality)

There are many ways how one may have a decrease in the rate of growth without changes in the epidemiological parameters. In spatial and networked SIR models this may be due to local saturation (e.g. see here an example).

So, are these change points fiction? I think not. The value of β in that model does change a lot.

I would not expect that this drop in growth rate is not occurring and that it is something due to a strange adjustment to an SIR model that makes it automatically drop.

Although when N is lower, which I believe is not included as one of the model parameters and seems to be fixed, then a drastic drop in growth rate may occur without a change of the epidemiological parameters.

If the wrong N is used then the model will be pushed to correct for this. The same is true when we wrongly assume that all cases are being measured (and thus underestimate the number of cases, because we did not include underreporting).

But anyway, I guess that it is reasonably to say that there is turnpoint/drop in the β there are many epidemiological curves that show a rapid decrease in growth rate. This is, I believe, not due to natural processes like saturation (growing immunity), but instead mostly due to the parameters changing.

The effect of these models is actually only very subtle. What these extra change points do is make the change from growth to decrease more smooth, and this only occurs over a short period. So instead of one big step you get three small steps between 8 and 22 March.

It is not hard to believe that you will get a smooth decrease in β (many mechanisms may create such change). More difficult is the interpretation. The change points are being related to particular events.

See for instance this quote in the abstract

“Focusing on COVID-19 spread in Germany, we detect change points in the effective growth rate that correlate well with the times of publicly announced interventions”

Or in the text

A third change point … was inferred on March 24 (CI[21,26])]; this inferred date matches the timing of the third governmental intervention

But that is speculation and may be just fiction. This is especially the case since they placed priors exactly on these dates (with standard deviation that more or less matches the size of the credible intervals, we have ‘posterior distribution ≈ prior distribution’ which means that the data did not add so much information regarding the dates):

So it is not like they did a three change point model and it turned out to be coincidentally matching the dates of particular interventions (this was my first interpretation after a quick scan of the article). They did not detect change points, and it is more like the model had a build in tendency to correlate well with the particular interventions, and place the ‘detected’ points near the dates of the interventions. (in addition there is free parameter for a reporting delay which allows some flexibility of a couple days between the date of change in the curves and the date of change in the interventions, so the date of the change points is not pinpointed/detected/inferred very precisely and overall it is more fuzzy)

The leave one out cross validation.

I believe that the LOO-CV is correctly applied. (but the interpretation is tricky)

I would have to dig into the code to know exactly, but I have little reasons to doubt it. What those scores mean is that the function with three change points did not overfit and was able to better capture the deterministic part of the model (but not that the model with three points is so much better than the model with one point, it is only a small improvement).

You might think, hey but what about the small differences between the three curves red, orange, green?

Yes, indeed the differences are only small. The change points occur only over a small time period. While the differences in the LOO-CV scores, from 819 to 796 to 787, may indicate some significance, this may not need to be relating to a ‘large’ effect and neither does the effect for the alternative model need to be relating to some realistic mechanism. See for instance the example in the image below where an additional x2 term is able to significantly improve a fit, but the difference of the effect is only small and the ‘true’ effect is a x3 term instead of the x2 term. But for that example the log likelihood scores are significantly different:

Also the small differences might be problematic. It is likely not very significant, especially when you consider that the noise is likely correlated. Because of that some degree of overfitting might possibly not be punished in a leave-one-out CV. 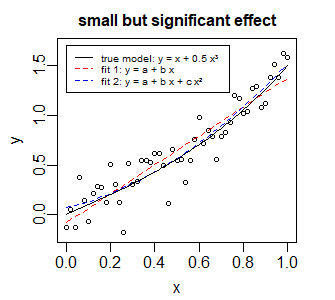 This example is for a linear model, and not a Bayesian setting, but it might help to see intuitively the case of a ‘significant but small effect’, and how this comparison in terms of log-likelihood values, instead of the effect size, is tangential to that.