I’ve created a custom object in a developer edition org with the sole intention of deleting it via the Metadata API as per Deleting Components from an Organization.

To do this I created the following files:

Then zipped them both into destructiveChanges.zip.

I uploaded the resulting zip file to the Workbench Metadata Deploy page and deployed it.

The processing status came back as successful. 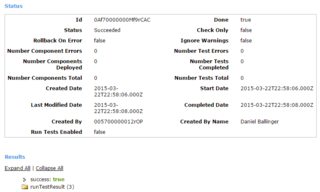 However, the custom object is still present and there is no indication that it has been deleted.

Why can’t I delete this custom object using destructive changes?

Note that this will ultimately be part of a much larger set of deletions. I could potentially use deleteMetadata(), but I’d rather figure out what is wrong with my deploy() call.

It turns out the following DeployOptions setting was what I was missing:

singlePackage
boolean
Indicates whether the specified .zip file points to a directory structure with a single package (true) or a set of packages (false).

I needed to set this to true, as I assume my flat zip file represents a single package. After doing that the Number of Components Deployed became 1 and the custom object moved into Deleted Objects (as I hadn’t checked purgeOnDelete).