Wondering if this is a bug or there is something about CC that just doesn’t make sense to me.

Below is screenshot after screenshot of example of red-lined code coverage that makes no sense. Everything from commented lines, System.debug lines, closing brackets, dynamic SOQL statements, etc. 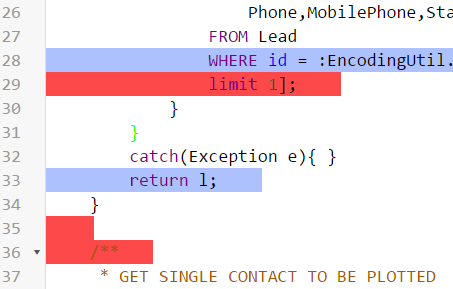 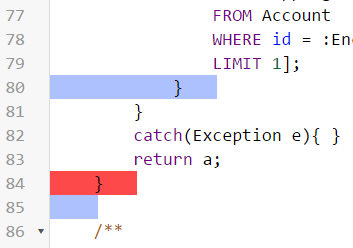 Also you can see here there is definitely an issue with the overall code coverage numbers. Mind you everything I’m showing you are the results both directly from our production AND from a fresh sandbox with only one test class being run in order to isolate the issues as much as possible. 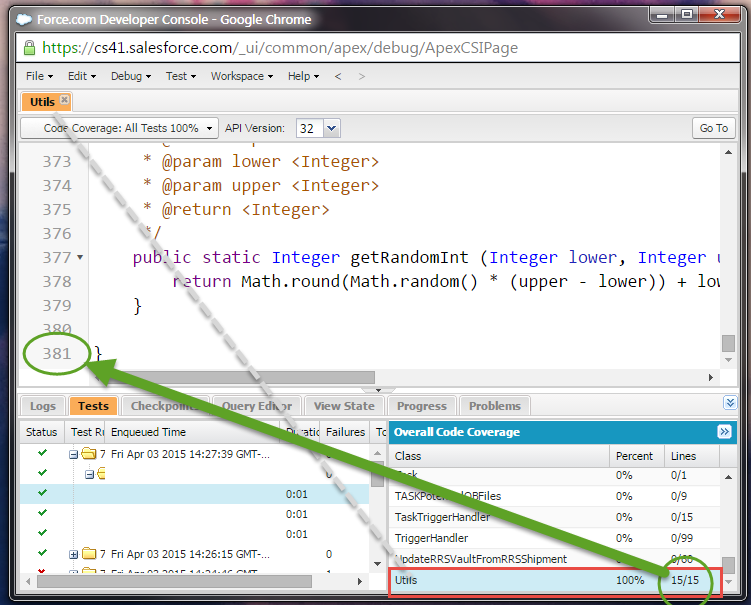 Any thoughts on this would be great, even if its just confirming there is a known bug and I’m not crazy. This is all just from 1 file but there are plenty of other example I have just like this.

Also, I have already reset/cleared all test data multiple times and re-run all test to make sure this result is as accurate as possible.

Thanks in advance for any help!

Follow the steps provided here:
Code coverage steps and considerations prior to deployments

Essentially the problem is the code coverage is accumulative, meaning that even if you “Clear Test Data” the lines that were covered are still stored in these other aggregate tables. Once you follow the steps and clear everything manually, as well as recompile your classes then you truly have a clean slate to THEN “Run All Test”

Clear this table (make sure to check “Use Tooling API”):

So currently the only solution I’ve had to accurately test the coverage of a file at any given time is:

This apparently removes it from the console’s cache of some sort.

If you do not destruct/delete and redeploy then the new lines covered seem to get added to the cached version and little by little your results are distorted. As you saw in the OP screenshots this can even lead to overall code coverage issues, claiming 15/15 are covered even though the file consist of hundreds of lines.

As per @Victor’s answer I posted a ticket. Took a few days to get a response and initially they wouldn’t even help because we apparently do not have developer support (typical SalesForce support to not even read your problem before quoting you your licensing limits).

Anyways, after a call to a sales rep they they finally looked into the issue and responded with the following:

I further checked on this and found that yes we are experiencing
issues with test class at our end.

The bad line coverage issues as you mentioned on stack trace has not
been identified as bug though but I checked that many customers are
complaining the same.

Since this is been complained by plenty of customers our R & D team
will take notice on it and might create a public known issue link for
customers.

There are other issues too , related to test class only, for instance
– https://success.salesforce.com/issues_view?id=a1p30000000T4oRAAS

Bottom line is – as of now no known issue is published for your
concerned problem however I confirm that other users are also facing
the same so we might see a bug link on it.

Recompilation and clearing Test execution history might help but
sometimes it doesn’t.

Kindly let me know if you have any other concern too regarding this.

The patch for the related issue is set for an October release but if the problem proves to be bigger than they expect then it can be sooner so be sure to add any details you know about this so we can inform them.