Has anyone else been experiencing issues with the Developer Console simply sporadically erroring out in Google Chrome since the new release? Anything I can do to fix this?

EDIT: I tried Peter’s fix of clearing cache/cookies/browsing data in the browser and it still didn’t work. I ran the following line System.debug('Weird bug'); in Execute Anonymous and the clicked the log and this is the result. 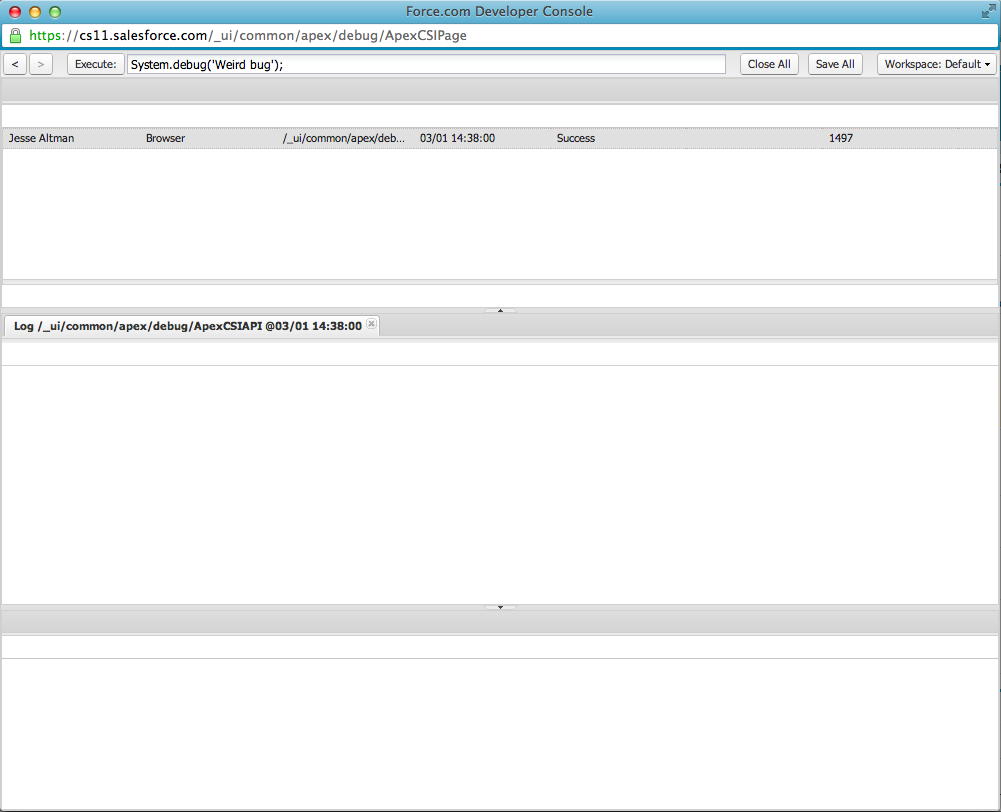 EDIT: This is fixed. It should be safe to dive back in.

Chrome changed the way it accepted inputs to resize methods in v25, so we had to modify our resize code. They’re not as forthcoming with release notes and regression testing as we are!

EDIT: This is officially logged as a known issue – Developer Console log viewer fails to display correctly on Chrome v25

Hi all: The development team is aware of this issue and has been working through the weekend to isolate it. The Javascript console isn’t showing errors, so it took us a while to pin it down. We will release something as soon as we are confident that we’ve restored relative stability.

EDIT: It appears this issue exists in Chrome 25, but not in Chrome 24.

UPDATE: There is a known incompatibility between EXT 4.1 and Chrome 25. When your browser got auto-updated, you got to experience this first-hand in the developer console. The layouts stop rendering, which is what you see (or don’t see). Sencha, the creator of the EXT library, is working on this issue, and we’re waiting on them.

What we found in doing a lot of repro work is that the workspace can get messed up by opening a log with three columns (stack tree, execution log, and source, for example). If you change the default perspective to exclude the stack tree and execution stack, you should avoid the rendering issues.

Firefox seems to work, so that’s probably the easiest workaround while this general bug gets sorted between Sencha and Google. Another option is to uninstall Chrome 25, reinstall Chrome 24, and turn off automatic updates. That seems like overkill compared to using Firefox, but it should work!