What is the correct way to specify a difference in difference model with individual level panel data?

Here is the setup: Assume that I have individual-level panel data embedded in cities for multiple years and the treatment varies on the city-year level. Formally, let $y_{ist}$ be the outcome for individual $i$ in city $s$ and year $t$ and $D_{st}$ be a dummy for whether the intervention affected city $s$ in year $t$. A typical DiD estimator such as the one outlined in Bertrand et al (2004, p. 250) is based on a simple OLS model with fixed effect terms for city and year:

Bertrand, Marianne, Esther Duflo, and Sendhil Mullainathan. 2004. “How Much Should We Trust Differences-in-Differences Estimates?” Quarterly Journal of Economics 119(1):249–75.

A nice feature of difference-in-differences (DiD) is actually that you don’t need panel data for it. Given that the treatment happens at some sort of level of aggregation (in your case cities), you only need to sample random individuals from the cities before and after the treatment. This allows you to estimate
$$
y_{ist} = A_g + B_t + \beta D_{st} + c X_{ist} + \epsilon_{ist}
$$
and get the causal effect of the treatment as the expected post-pre outcome difference for the treated minus the expected post-pre outcome difference for the control.

There is a case in which people use individual fixed effects instead of a treatment indicator and this is when we don’t have a well-defined level of aggregation at which the treatment occurs. In that case you would estimate
$$
y_{it} = \alpha_i + B_t + \beta D_{it} + cX_{it}+\epsilon_{it}
$$
where $D_{it}$ is an indicator for the post-treatment period for individuals who received the treatment (for example, a job market program which happens all over the place). For more information on this see these lecture notes by Steve Pischke.

Here is a code example which shows that this is the case. I use Stata but you can replicate this in the statistical package of your choice. The “individuals” here are actually countries but they are still grouped according to some treatment indicator.

In response to the comment
I mentioned the Pischke example to show when people use individual fixed effects rather than a treatment group indicator. Your setting has a well defined group structure so the way you have written your model that’s perfectly fine. Standard errors should be clustered at the city level, i.e. the level of aggregation at which the treatment occurs (I haven’t done this in the example code but in DiD settings the standard errors need to be corrected as demonstrated by the Bertrand et al paper).

So if you have 4 post-treatment periods for an individual who lives in a treated city for the first two, and then moves to a control city for the remaining two periods, the first two of those observations will be used in the computation of $E(y_{ist}|s=1,t=1)$ and the last two in $E(y_{ist}|s=0,t=1)$. To make it clear why identification comes from the group differences over time and not from the movers you can visualize this with a simple graph. Suppose the change in the outcome is truly only because of the treatment and that it has a contemporaneous effect. If we have an individual who lives in a treated city after the treatment starts but then moves to a control city, their outcome should go back to what it was before they were treated. This is shown in the stylized graph below. 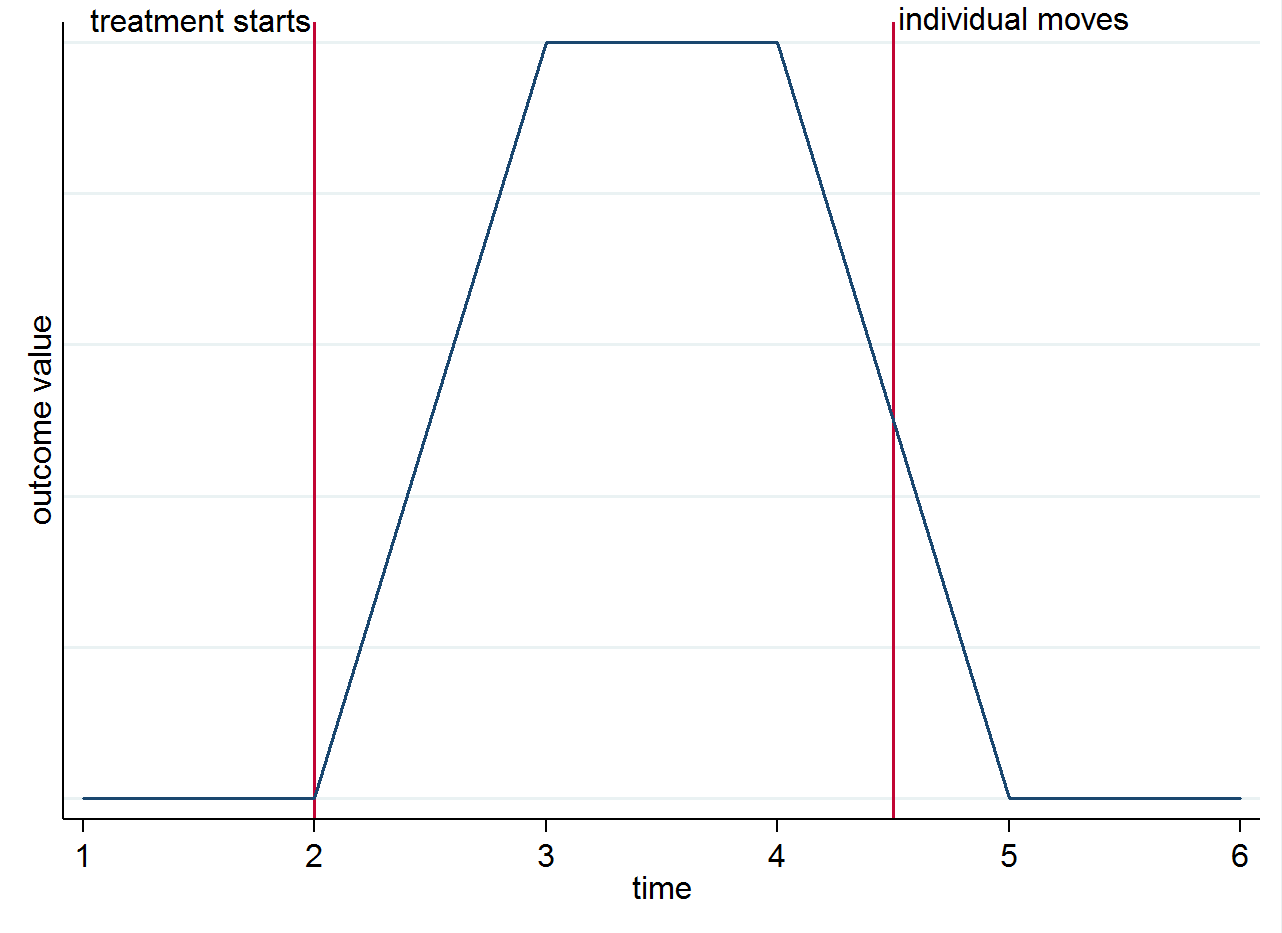 You might still want to think about movers for other reasons though. For instance, if the treatment has a lasting effect (i.e. it still affects the outcome even though the individual has moved)