As part of an assignment, I had to fit a model with two predictor variables. I then had to draw a plot of the models’ residuals against one of the included predictors and make changes based on that. The plot showed a curvilinear trend and so I included a quadratic term for that predictor. The new model showed the quadratic term to be significant. All good so far.

Which term (the quadratic or the interaction) should I include in the model and why?

When the predictors are correlated, a quadratic term and an interaction term will carry similar information. This can cause either the quadratic model or the interaction model to be significant; but when both terms are included, because they are so similar neither may be significant. Standard diagnostics for multicollinearity, such as VIF, may fail to detect any of this. Even a diagnostic plot, specifically designed to detect the effect of using a quadratic model in place of interaction, may fail to determine which model is best.

The thrust of this analysis, and its main strength, is to characterize situations like that described in the question. With such a characterization available it’s then an easy task to simulate data that behave accordingly.

Consider two predictors X1 and X2 (which we will automatically standardize so that each has unit variance in the dataset) and suppose the random response Y is determined by these predictors and their interaction plus independent random error: 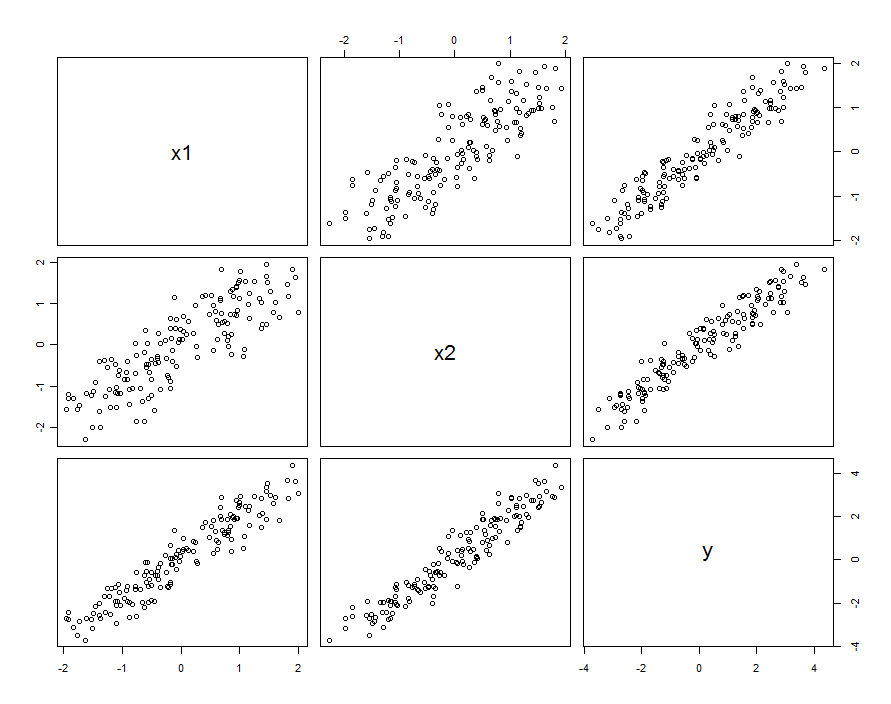 This doesn’t necessarily mean we are thinking of X1 and X2 as realizations of random variables: it can include the situation where both X1 and X2 are settings in a designed experiment, but for some reason these settings are not orthogonal.

Regardless of how the correlation arises, one good way to describe it is in terms of how much the predictors differ from their average, X0=(X1+X2)/2. These differences will be fairly small (in the sense that their variance is less than 1); the greater the correlation between X1 and X2, the smaller these differences will be. Writing, then, X1=X0+δ1 and X2=X0+δ2, we can re-express (say) X2 in terms of X1 as X2=X1+(δ2−δ1). Plugging this into the interaction term only, the model is

Provided the values of β1,2[δ2−δ1] vary only a little bit compared to β1, we can gather this variation with the true random terms, writing

Thus, if we regress Y against X1,X2, and X21, we will be making an error: the variation in the residuals will depend on X1 (that is, it will be heteroscedastic). This can be seen with a simple variance calculation:

However, if the typical variation in ε substantially exceeds the typical variation in β1,2[δ2−δ1]X1, that heteroscedasticity will be so low as to be undetectable (and should yield a fine model). (As shown below, one way to look for this violation of regression assumptions is to plot the absolute value of the residuals against the absolute value of X1–remembering first to standardize X1 if necessary.) This is the characterization we were seeking.

Remembering that X1 and X2 were assumed to be standardized to unit variance, this implies the variance of δ2−δ1 will be relatively small. To reproduce the observed behavior, then, it should suffice to pick a small absolute value for β1,2, but make it large enough (or use a large enough dataset) so that it will be significant.

In short, when the predictors are correlated and the interaction is small but not too small, a quadratic term (in either predictor alone) and an interaction term will be individually significant but confounded with each other. Statistical methods alone are unlikely to help us decide which is better to use.

Let’s check this out with the sample data by fitting several models. Recall that β1,2 was set to 0.1 when simulating these data. Although that is small (the quadratic behavior is not even visible in the previous scatterplots), with 150 data points we have a chance of detecting it.

The quadratic term is significant. Its coefficient, 0.068, underestimates β1,2=0.1, but it’s of the right size and right sign. As a check for multicollinearity (correlation among the predictors) we compute the variance inflation factors (VIF):

Any value less than 5 is usually considered just fine. These are not alarming.

Next, the model with an interaction but no quadratic term:

All the results are similar to the previous ones. Both are about equally good (with a very tiny advantage to the interaction model).

Finally, let’s include both the interaction and quadratic terms:

If we had tried to detect the heteroscedasticity in the quadratic model (the first one), we would be disappointed: 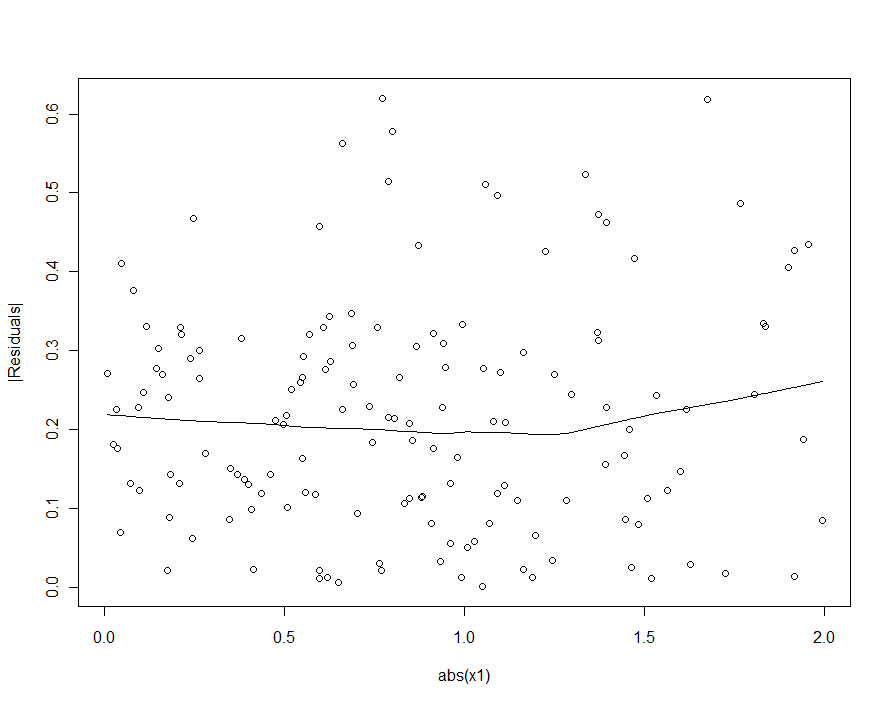 In the loess smooth of this scatterplot there is ever so faint a hint that the sizes of the residuals increase with |X1|, but nobody would take this hint seriously.