I have the following data, which can be modeled by exponential distribution

In order to test if the data follow exponential distribution i will use chi-squared test-statistic. But for this I also need to compute lambda (MLE = \frac{1}{\bar X}).

So my question is: how should we choose the midpoint of the interval, if the last interval is from 120 to infinity?

I would not use the midpoint for any of those intervals (expect perhaps as an initial guess for some iterative procedure).

If the data were really from an exponential distribution, the values within each bin should be right skew; the mean would be expected to be left of the average of the bin boundaries.

Note that the equation \hat{\lambda}=\frac{1}{\bar{X}} is suitable if you have all the data. With binned data you need to maximize the likelihood for a binned (i.e. interval-censored) exponential.

[The contribution to log-likelihood of the n_i observations in bin i — those between l_i and u_i — is n_i \log(F(l_i)-F(u_i)) (where the two terms in F are functions of the parameter(s) of the distribution).]

So (assuming you don’t directly maximize the likelihood* on the interval censored data as I suggested), you could begin with some approximate estimate of the mean (m^{(0)} say) and use 120+m^{(0)} as a “centre” of the upper tail.

This might then be used to get a better estimate of the parameter (and hence of the mean) and so obtain an improved estimate of the conditional mean in each bin including the top one. [If you want such an approach I would perhaps lean toward doing EM directly.]

Either of these would be reasonable to use as an initial guess at how far above 120 to place an estimate for the conditional mean for the last bin. 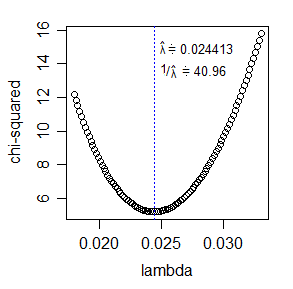