Most of the advice around resolving Simpson’s paradox is that you can’t decide whether the aggregate data or grouped data is most meaningful without more context.

However, most of the examples I’ve seen suggest that the grouping is a confounding factor, and that it is best to consider the groups.

For example in How to resolve Simpson’s Paradox, discussing the classic kidney stones dataset, there is universal agreement that it makes more sense to consider the kidney stone size groups in the interpretation and choose treatment A.

I’m struggling to find or think of a good example where the grouping should be ignored. 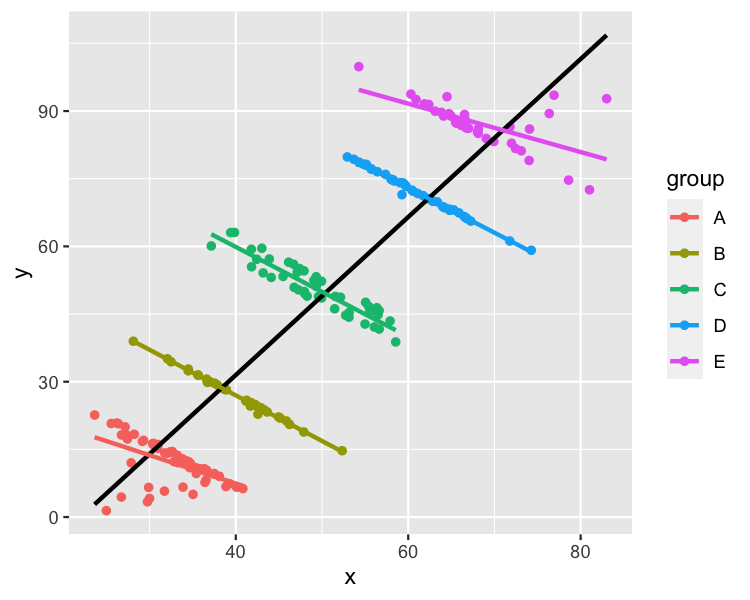 I can easily think of labels for x, y, and group that would make this a dataset where modeling each group made the most sense. For example,

I read Pearl, Judea. “Causal diagrams for empirical research.” Biometrika 82.4 (1995): 669-688. and it contains a causal diagram where the suggestion is that you shouldn’t condition on Z. 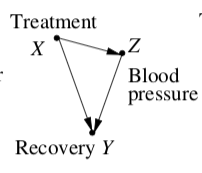 How can I label x, y, and group in the scatter plot to make a dataset where the grouping should be ignored?

This is a bit of a diversion, but to answer Richard Erickson’s question about hierarchical models:

Here’s the code for the dataset

A linear regression of the whole dataset

A linear regression including group

also gives an x coefficient of -0.82. So there’s not a huge benefit over just using a plain linear regression if you aren’t worried about confidence intervals or variation within/between groups.

I’m leaning towards abalter’s interpretation that “if group is important enough to consider including in the model, and you know the group, then you might as well actually include it and get better predictions”.

Except this does not hold if we look inside cities. Inside cities, often the areas with higher density have fewer infections and deaths per capita.