It is common to use weights in applications like mixture modeling and to linearly combine basis functions. Weights w_i must often obey w_i ≥ 0 and \sum_{i} w_i=1. I’d like to randomly choose a weight vector \mathbf{w} = (w_1, w_2, …) from a uniform distribution of such vectors.

However, given the constraint \sum_{i} w_i=1, it seems that the underlying dimensionality of the problem is n-1, and that it should be possible to choose a \mathbf{w} by choosing n-1 parameters according to some distribution and then computing the corresponding \mathbf{w} from those parameters (because once n-1 of the weights are specified, the remaining weight is fully determined). 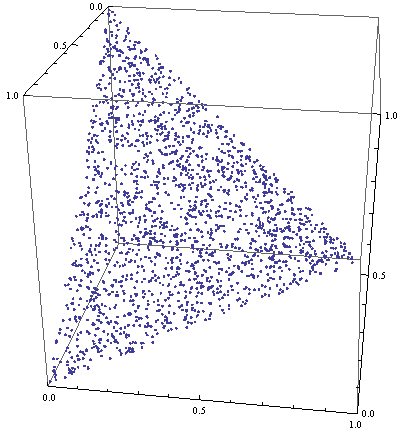 This 3D point plot shows the results of 2000 iterations of this algorithm for n=3. The points are confined to the simplex and are approximately uniformly distributed over it.

Because the execution time of this algorithm is O(n \log(n)) \gg O(n), it is inefficient for large n. But this does answer the question! A better way (in general) to generate uniformly distributed values on the n-1-simplex is to draw n uniform reals (x_1, \ldots, x_n) on the interval [0,1], compute

(which makes each y_i positive with probability 1, whence their sum is almost surely nonzero) and set

This works because each y_i has a \Gamma(1) distribution, which implies \mathbf w has a Dirichlet(1,1,1) distribution–and that is uniform. 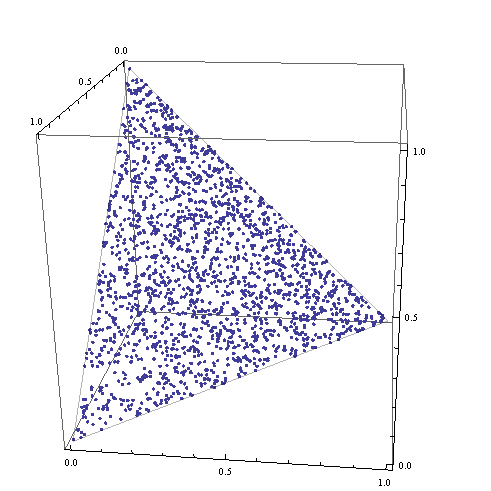