Context: I’m new to Bayesian stats and am trying to fit a multiple regression with rstan. All variables are continuous and there is no hierarchical structure.

One of my predictors is left-censored because it falls below the detection limit for a chemical assay. What is the best way to deal with this in a multiple regression? So far, I can see a few possibilities:

Am I missing better options? Are there useful Bayesian tricks that can help deal with this problem? I’m also open to non-Bayesian options.

The histogram below shows the distribution of values. The plot is on a log scale because that is most natural for this variable. For visual clarity, I have treated values below the detection limit (~25% of the data) as being 1/10 of the detection limit, and added a red line to separate them from the remaining points. Note that the red line is not the precise detection limit; the smallest quantified values to the right of the red line are at the putative limit. The fact that there are very few values exactly at the limit suggests that there may have been some variation in the detection limit between measurements, but I don’t mind if that is ignored for the purposes of this question. 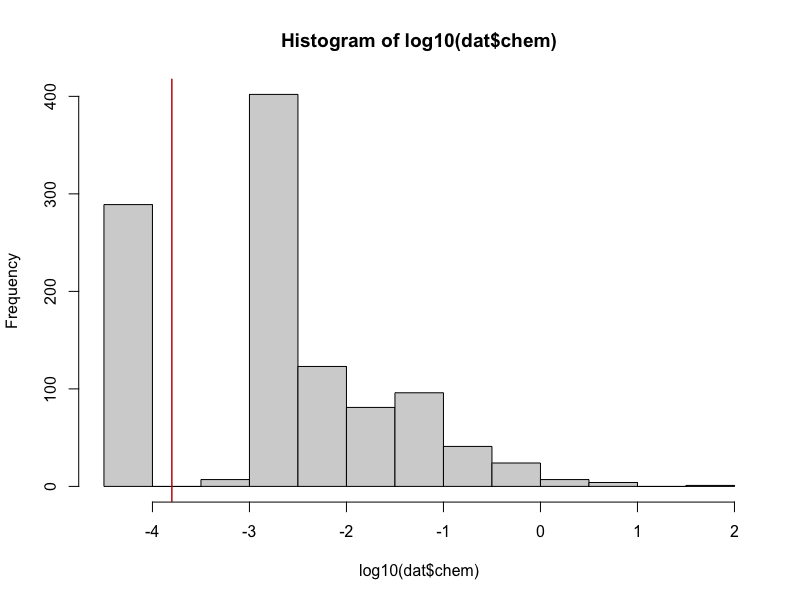 Here’s my rstan code, in case that is helpful. Betas 1 through 4 represent main effects, 5 & 6 are interaction terms (between 1 & 3 and 2 & 4). The censored predictor is therefore present in an interaction term as well, which is a complication I neglected to mention earlier.

rstan provides you with all the tools you need to solve this problem with Bayesian inference. In addition to the usual regression model of response $y$ in terms of predictors $x$, you should include a model of $x$ in the Stan code. This model should include the left-censoring. The Stan user manual chapter on censoring explains two different ways to do this in the Stan language. The first way is easier to incorporate into a regression model. The model for $x$ would look something like this (omitting the definition of N_obs and such):