In Google Sheets, I want to decimal-align numbers without adding trailing zeros in the fractional part.

The format of the first column is easily accomplished (for example, using the format “0.0” or just setting custom decimal points under the 123 button).

In Excel, I believe the format of the second column is accomplished using the format “0.?”, but as of this writing it does not work in Google Sheets.

It is possible to force trailing characters with Substitute:

Some undesirable side effects of this workaround are that it

With the following custom number format, you are able to decimal-align numbers in Google Sheets, even by using fonts that use kerning. 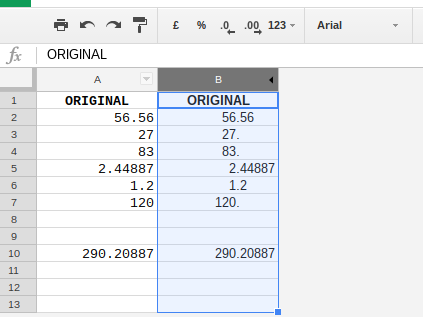 I’ve added this solution in an example file: Decimal-Aligned Numbers