A random population sample was surveyed. They were asked if they eat vegetarian diet. If they answered yes, they were also asked to specify how long they’ve been eating vegetarian diet without interruption. I want to use this data to calculate average length of adherence to vegetarianism. In other words, when someone becomes vegetarian, I want to know long on average they stay vegetarian. Let’s assume that:

My reasoning so far

I found it helpful to analyse a toy model of the world, where at the beginning of every year two people become vegetarians. Every time, one of them stays vegetarian for 1 year and another for 3 years. Obviously, the average length of adherence in this world is (1 + 3) / 2 = 2 years. Here is a graph that illustrates the example. Each rectangle represents a period of vegetarianism:

Let’s say we take a survey in the middle of year 4 (red line). We get the following data:

We’d get the same data if we took the survey at any year, starting year 3. If we just average the responses we get:

We underestimate because we assume that everyone stopped being vegetarians right after survey, which is obviously incorrect. To obtain an estimate that is closer to the real average times that these participants would remain vegetarian, we can assume that on average, they reported a time about halfway through their period of vegetarianism and multiply reported durations by 2. In a large survey drawing randomly from the population (like the one I’m analysing), I think this is a realistic assumption. At least it’d give a correct expected value. However, if doubling is the only thing we do, we get average of 2.5, which is an overestimate. This is because the longer person stays vegetarian, the more likely (s)he is to be in the sample of current vegetarians.

However, this gives an incorrect average as well:

It’d give the correct estimate if number of vegetarians were divided by their correct lengths of adherence:

But it doesn’t work if I use predicted lengths of adherence and they are all I have in reality. I don’t know what else to try. I read a bit about survival analysis but I’m not sure how to apply it in this case. Ideally, I would also like to be able to calculate a 90% confidence interval. Any tips would be greatly appreciated.

EDIT: It may be possible that the question above has no answer. But there was also another study that asked a random sample of people if they are/were vegetarian and how many times they’ve been vegetarian in the past. I also know age of everyone in both studies and some other things. Maybe this information can be used in conjunction to the survey of current vegetarians to get the mean somehow. In reality, the study I talked about is just one piece of the puzzle, but a very important one and I want to get more out of it.

Let $f_X(x)$ denote the pdf of adherence length $X$ of vegetarianism in the population. Our objective is to estimate $EX=\int_0^\infty x f_X(x)\;dx$.

This suggests estimating $EX$ by perhaps first estimating $f_{Z|S}(z)$ non-parametrically from the observed data $z_1,z_2,\dots,z_n$. One option is kernel density estimation, using Silverman’s reflection method around $z=0$ since the domain of $f_Z(z)$ has a lower bound at $z=0$. This method applied to simulated data is shown as the red curve in the figure below. Having obtained an estimate $\hat f_Z(0)$ of $f_Z(z)$ at $z=0$, an estimate of $EX$ is then given by $\widehat{EX}=1/\hat f_Z(0)$. 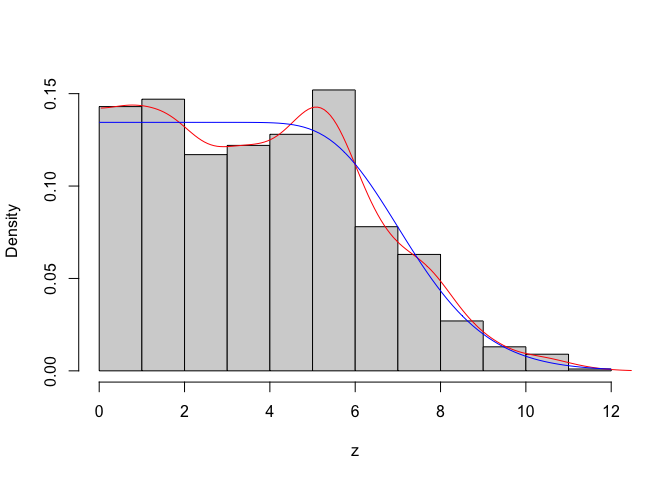 This non-parametric method is not ideal however since it does not exploit the fact that $f_{Z|S}(z)$ is a non-increasing function. Also, if $f_X(0)=F_X'(0)>0$, $f_{Z|S}(0)$ may become severely underestimated and $EX$ overestimated. Finding an estimate of $EX$ in such situations without making more assumptions seems difficult, essentially because short adherence times present in this situation hardly show up in the observed data as a result of the biased sampling.

Alternatively, one could make some distributional assumptions about $f_X(x)$ and fit a parametric model by maximising the likelihood
$$
L(\theta)=\prod_{i=1}^n \frac{1-F_X(z_i;\theta)}{EX(\theta)} \tag{4}
$$
numerically (blue curve in above figure).