In the video lectures from Harvard’s Statistics 110:Probability course that can be found on iTunes and YouTube, I encountered this problem. I tried to summarize it here:

Suppose we are given a random two-card hand from a standard deck.

Since having at least one ace is implied if you have both aces, the intersection can be reduced to just $P(both\ aces)$

This is then just

Now, somewhere along these examples I got lost…

The latter is obviously just the same as $\frac{3}{51}$, which makes a lot of sense (to me) that this would be the answer. If you are told that you have the ace of (say) spades, then you know that there are $3$ more aces and $51$ more cards.

But in the former example, the math seems fine (and I believe the lecturer wouldn’t give this example if it was incorrect…), but I can’t wrap my head around this.

How do I get some intuition for this problem?

There are $52 \times 51$ equally likely ways to deal two cards at random. A convenient way to visualize these deals is to lay them out in a table with rows (say) designating the first card dealt and columns the second card in the deal. Here is a part of this table, with ellipses ($\cdots$) designating the missing parts. Notice that because the two cards cannot be the same, no entries exist along the main diagonal of the table. The rows and columns are ordered from aces up through kings: 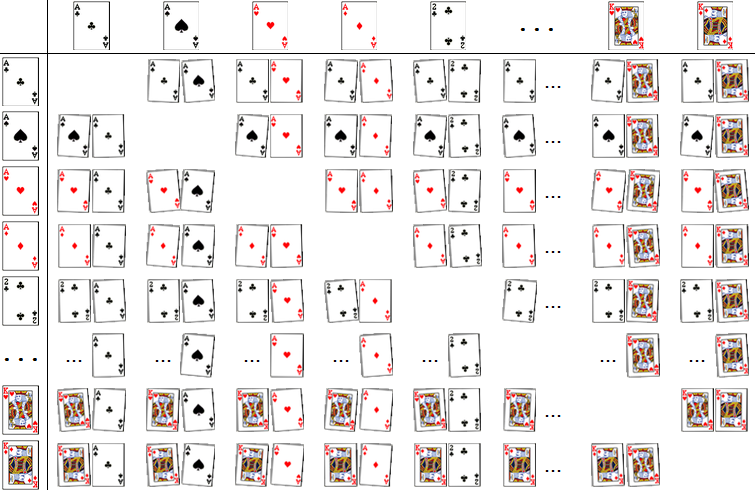 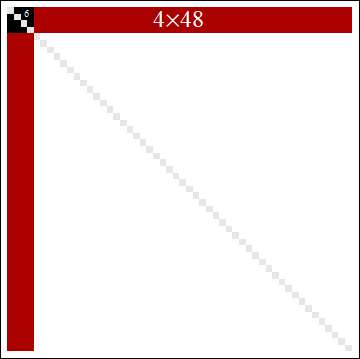 It is the black fraction of the red+black region.

The second question asserts “we have the ace of spades.” This corresponds only to the very first row and column: 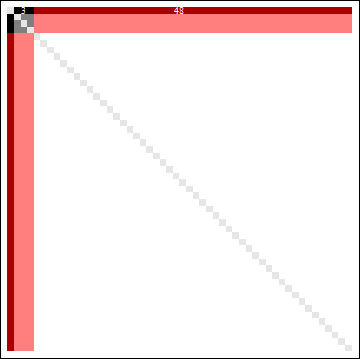 Again it is the black fraction of the red+black region.

For reference, the last figure includes the previous one shown in pink and gray. Comparing these regions reveals what happened: in going from the first question to the second, the number of pairs in the conditioning event (pink) dropped to about one-quarter of its original count (red), while the number of pairs in question dropped by only one-half (from gray to black, $12$ to $6$).

I have found such schematic figures to be helpful even–perhaps especially–when trying to understand more complicated concepts of probability, such as filtrations of sigma algebras.