From theory I understood that multiple regression assumes linear relationships between Y and each of X (Y and X1, Y and X2). I’m not using any transformation of X.

So, I got the model with R=0.45 and all significant X (P<0.05).
Then I plotted Y against X1. I don’t understand why red-colored circles that are predictions of the model do not form a line. As I said before, I expected that each pair of Y and X is fitted by a line. 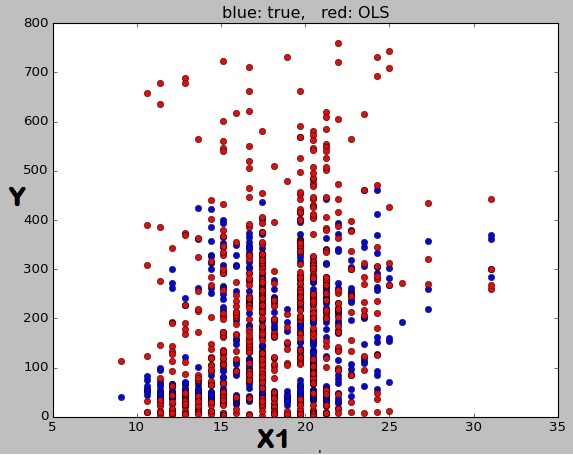 The plot is generated in python this way:

Suppose your multiple regression equation was

Now take just those points for which x_2 = 1. Then if you plot \hat y against x_1, these points will satisfy the equation:

So they must lie on a line of slope 2 and with y-intercept 8.

Now take those points for which x_2 = 2. When you plot \hat y against x_1, then these points satisfy:

We see that points with different values of x_2 will lie on different lines, but all with the same gradient: the meaning of the coefficient of 2x_1 in the original regression equation is that, ceteris paribus i.e. holding other predictors constant, a one unit increase in x_1 increases the predicted mean response \hat y by two units, while the meaning of the intercept of 3 in the regression equation was that when x_1 = 0 and x_2 = 0 then the predicted mean response is 3. But not all your points have the same x_2, which means they lie on lines with a different intercept — the line would only have intercept 3 for those points for which x_2=0. So rather than seeing a single line, you may see (if there are only certain values of x_2 that occur, for instance if x_2 is always integer) a series of diagonal “streaks”. Consider the following data, where \hat y = 2 x_1 + 5 x_2 + 3. 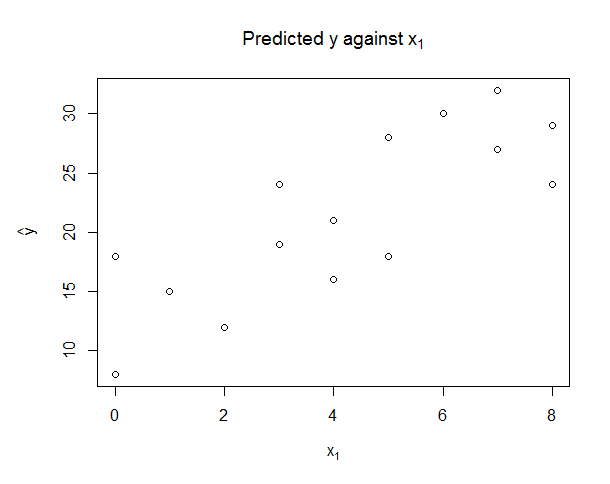 Here there are perceptible “streaks”. Now if I colour in those points for which x_2=1 as red circles, x_2=2 as gold triangles and x_2=3 as blue squares we see they lie on three distinct lines, all of slope 2, and y-intercepts 8, 13 and 18 as calculated above. Of course, if x_2 wasn’t constrained to take integer values, or the situation was complicated by other predictor variables being included in the regression, then the diagonal streaking would be less clear, but it would still be the case that each predicted point lies on a separate line based on the values of the other predictors not shown on the graph. 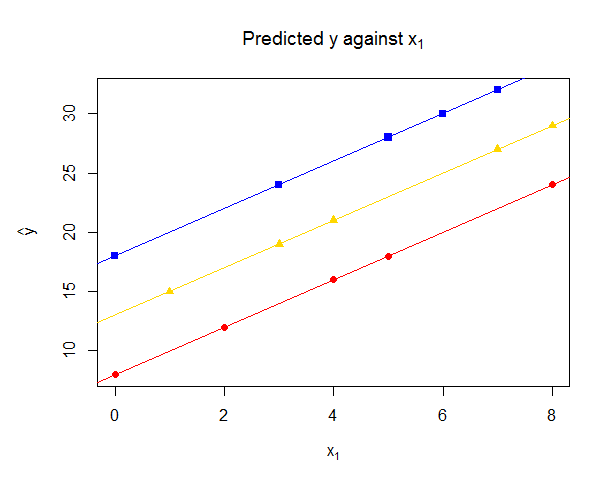 If you were to plot a 3-dimensional graph of y against x_1 and x_2, then your predicted points all lie in the two-dimensional plane with equation \hat y = 2 x_1 + 5 x_2 + 3. The y versus x_1 graph I described above is a projection of that three-dimensional graph onto two dimensions — imagine lining yourself up with the x_2-axis so you are looking straight down it, while the y-axis points upwards and the x_1-axis points to your right. 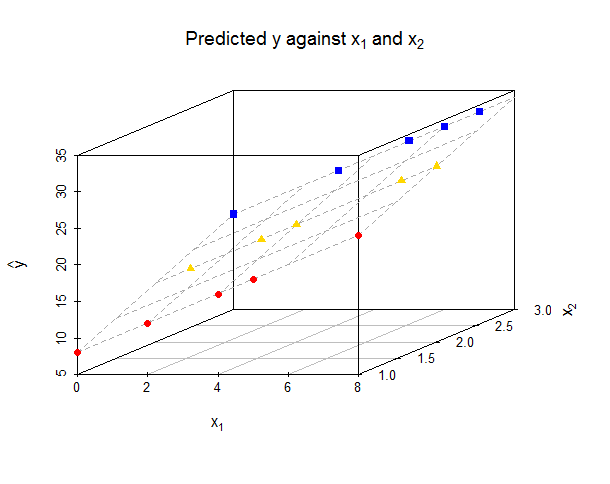 Note that all the points lie in a flat plane precisely because I have drawn the fitted (i.e. predicted) y values. If we drew a plot using the observed y values then these will lie vertically above or below these points, depending on whether the residual is positive or negative respectively.