If you look at a beta distribution with \alpha=\beta=4 it looks very similar to a Gaussian distribution. But is it? How can you prove whether a Beta(4,4) distribution is Gaussian or not?

Let’s look a bit more closely at the comparison. We’ll standardize the beta(4,4) so that it has mean 0 and standard deviation 1 (a standardized beta) and look at how the density compares to a standard Gaussian: 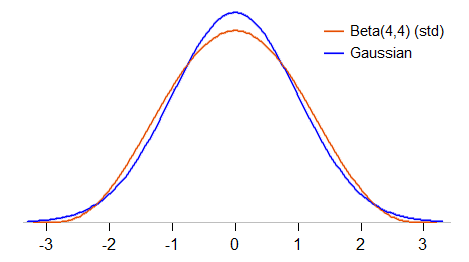 The standardized beta(4,4) is restricted to lie between -3 and 3 (the standard Gaussian can take any value); it is also less peaked than the Gaussian and has rounder “shoulders” around 1 or so standard deviations either side of the mean. Its kurtosis is 27/11 (\approx2.45, vs 3 for the Gaussian).

In the limit as the parameter approaches infinity, a standardized symmetric beta approaches a standard normal distribution (example proof here).

So no specific case of the symmetric beta is Gaussian, but the limiting case of a suitably standardized beta is Gaussian. We can see this approach more easily by looking at the cdf of the beta, transformed by the quantile function of the Gaussian. On this scale the Gaussian would lie on the y=x line, while the symmetric beta family would approach the y=x line as the parameter got larger and larger.

In the plot below we look at the deviations from the y=x line to more clearly see the approach of the beta(\alpha,\alpha) to the Gaussian as \alpha increases. 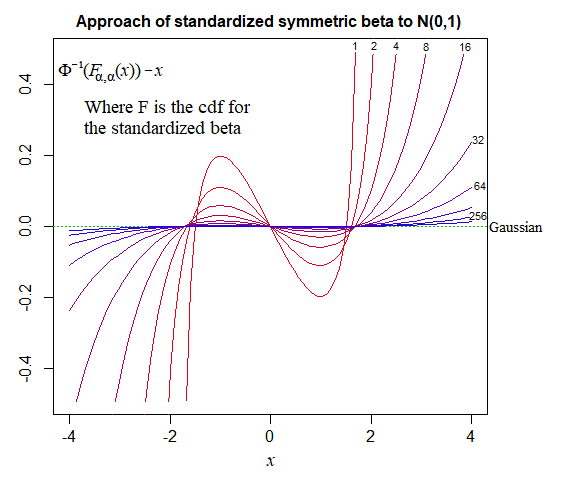