Let \mathbf{X}= (x_1, x_2, \dots x_n) be a random sample from the uniform distribution on (a,b), where a < b. Let Y_1 and Y_n be the largest and smallest order statistics. Show that the statistic (Y_1, Y_n) is a jointly complete sufficient statistic for the parameter \theta = (a, b).

It is no problem for me to show sufficiency using factorization.

Question: How do I show completeness? Preferably I would like a hint.

I tried playing around with \mathbb E[g(Y_1, Y_n)] and using the joint distribution of Y_1 and Y_n, but I am not sure if I am going in the correct direction, as the calculus is tripping me up.

Let's take care of the routine calculus for you, so you can get to the heart of the problem and enjoy formulating a solution. It comes down to constructing rectangles as unions and differences of triangles.

First, choose values of a and b that make the details as simple as possible. I like a=0,b=1: the univariate density of any component of X=(X_1,X_2,\ldots,X_n) is just the indicator function of the interval [0,1].

Let's find the distribution function F of (Y_1,Y_n). By definition, for any real numbers y_1 \le y_n this is

Because the X_i are independent, their probabilities multiply and give (y_n-0)^n = y_n^n and (y_n-y_1)^n, respectively, for these two events just mentioned. Thus,

The density f is the mixed partial derivative of F,

The general case for (a,b) scales the variables by the factor b-a and shifts the location by a. Thus, for a \lt y_1 \le y_n \lt b,

Differentiating as before we obtain

Consider the definition of completeness. Let g be any measurable function of two real variables. By definition,

We need to show that when this expectation is zero for all (a,b), then it's certain that g=0 for any (a,b).

Accordingly, given any measurable h, define

(When the task is showing that something is zero, we may ignore nonzero constants of proportionality. Here, I have dropped n(n-1)/(b-a)^{n-2} from the left hand side.)

This is an integral over a right triangle with hypotenuse extending from (a,a) to (b,b) and vertex at (a,b). Let's denote such a triangle \Delta(a,b).

Ergo, what you need to show is that if the integral of an arbitrary measurable function h over all triangles \Delta(a,b) is zero, then for any a\lt b, h(x,y)=0 (almost surely) for all (x,y)\in \Delta(a,b).

Although it might seem we haven't gotten any further, consider any rectangle [u_1,u_2]\times [v_1,v_2] wholly contained in the half-plane y \gt x. It can be expressed in terms of triangles: 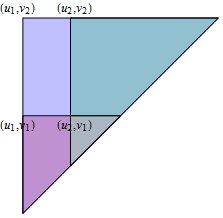 In this figure, the rectangle is what is left over from the big triangle when we remove the overlapping red and green triangles (which double counts their brown intersection) and then replace their intersection.

Consequently, you may immediately deduce that the integral of h over all such rectangles is zero. It remains only to show that h(x,y) must be zero (apart from its values on some set of measure zero) whenever y \gt x. The proof of this (intuitively clear) assertion depends on what approach you want to take to the definition of integration.