I am using the RandomForest R package and am confused at how to interpret the values of the Y-axis in their partial dependence plots. Help docs state that the plot is a “graphical depiction of the marginal effect of a variable on the class probability.” However, I am still confused as to what exactly the y-axis represents. 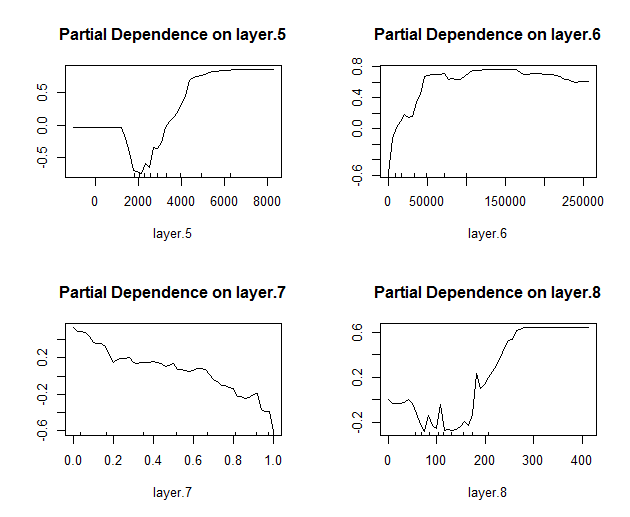 Particularly, what do the negative values mean?
What does it mean to have a negative influence on accurately predicting the class?

And what is the most important feature from these figures, is it the max value, the shape of the trend etc?

There are many different approaches to determine feature importance and max absolute value is just one simple measure. Typically, people look at the shape of the partial plots to gather understanding about what the model is suggesting about the relationship from variables to class labels.

The answer to this is less black and white. You can certain look at the range of the y-axis for each plot; If the partial dependence on one variable is near zero for the whole range of the variable, that tells you that the model does not have any relationship from the variable to the class label. Back to your question, the larger the range, the stronger the influence overall so in this sense they can be compared.

I have no experience with Maxent.