I decided to use a permutation test, doing the following in R:

Nevertheless, p-values should not be 0 according to this paper: http://www.statsci.org/smyth/pubs/permp.pdf

What do you recommend me to do? Is this way to calculate the p-value:

a good way? Or is it better doing the following?

A permutation test generates all relevant permutations of a dataset, computes a designated test statistic for each such permutation, and assesses the actual test statistic in the context of the resulting permutation distribution of the statistics. A common way to assess it is to report the proportion of statistics which are (in some sense) “as or more extreme” than actual statistic. This is often called a “p-value.”

Because the actual dataset is one of those permutations, its statistic will necessarily be among those found within permutation distribution. Therefore, the p-value can never be zero.

Therefore, any numbers (such as a “p-value”) derived from such a sample are only estimators of the properties of the permutation distribution. It is quite possible–and often happens when effects are large–that the estimated p-value is zero. There is nothing wrong with that, but it immediately raises the heretofore neglected issue of how much could the estimated p-value differ from the correct one? Because the sampling distribution of a proportion (such as an estimated p-value) is Binomial, this uncertainty can be addressed with a Binomial confidence interval.

A well-constructed implementation will follow the discussion closely in all respects. It would begin with a routine to compute the test statistic, as this one to compare the means of two groups:

Write another routine to generate a random permutation of the dataset and apply the test statistic. The interface to this one allows the caller to supply the test statistic as an argument. It will compare the first m elements of an array (presumed to be a reference group) to the remaining elements (the “treatment” group).

The permutation test is carried out first by finding the statistic for the actual data (assumed here to be stored in two arrays control and treatment) and then finding statistics for many independent random permutations thereof:

Now compute the binomial estimate of the p-value and a confidence interval for it. One method uses the built-in binconf procedure in the HMisc package:

It’s not a bad idea to compare the result to another test, even if that is known not to be quite applicable: at least you might get an order of magnitude sense of where the result ought to lie. In this example (of comparing means), a Student t-test usually gives a good result anyway:

This architecture is illustrated in a more complex situation, with working R code, at Test Whether Variables Follow the Same Distribution.

After using the preceding code to run a permutation test I plotted the sample of the permutation distribution along with a vertical red line to mark the actual statistic: 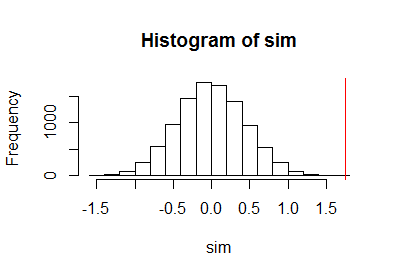 In other words, the estimated p-value was exactly zero with a (default 95%) confidence interval from 0 to 0.00037. The Student t-test reports a p-value of 3.16e-05, which is consistent with this. This supports our more nuanced understanding that an estimated p-value of zero in this case corresponds to a very small p-value that we can legitimately take to be less than 0.00037. That information, although uncertain, usually suffices to make a definite conclusion about the hypothesis test (because 0.00037 is far below common thresholds of 0.05, 0.01, or 0.001).

When k out of N values in the sample of the permutation distribution are considered “extreme,” then both k/N and (k+1)/(N+1) are reasonable estimates of the true p-value. (Other estimates are reasonable, too.) Normally there is little reason to prefer one to the other. If they lead to different decisions, that means N is too small. Take a larger sample of the permutation distribution instead of fudging the way in which the p-value is estimated.