I have a question about the random walk of two kings in a 3×3 chessboard.

Each king is moving randomly with equal probability on this chessboard – vertically, horizontally and diagonally. Τhe two kings are moving independently from each other in the same chessboard. Both of them start in the same square, and then they move independently.

How could we find the probability in time n both of them are in the same square, as n goes to infinity?

Let’s exploit the symmetry to simplify the calculations.

The chessboard and its moves remain the same when the board is reflected vertically, horizontally, or diagonally. This decomposes its nine squares into three types, their orbits under this symmetry group. Correspondingly, each king can be in one of three “states”: a corner square (C), an edge square (E), or the central (“middle”) square (M). (A state ignores which particular square a king is on and tracks only its equivalence class under the group of symmetries.)

The following results are immediate:

In this graph representing this Markov chain, transition probabilities are represented both by edge thickness and color: 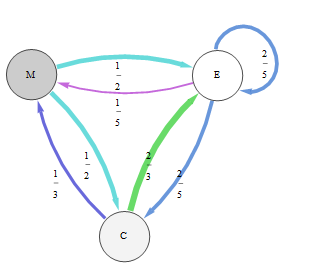 By inspection or otherwise, we find that a left eigenvector of its transition matrix

is \omega = (3, 5, 2)^\prime. This claim is easily checked by performing the multiplication: \omega \mathbb{P} = 1 \omega. The eigenvalue manifestly is 1. Because all states are connected, \omega gives the limiting probabilities of each king being in each state; we only need to rescale its components to sum to unity:

(This is where we reap the benefits of exploiting the symmetry: instead of working with a nine by nine matrix of 81 elements we only have to compute with a three by three matrix of 9 elements. The reduction of the problem from nine states to three paid off quadratically by reducing the computational effort by a factor of (9/3)^2 = 9.)