I have a set of numbers which are assumed to be coming from a Poisson distribution. The set has some outliers also and because of that, maximum likelihood estimates are badly affected. I heard that robust estimation procedures can help in such a situation. Can any one explain how to do this? I am not a statistics student.

I found that the glmrob function in R can be used for this. (I am quite new to R). But I could not figure out, how to use that despite reading the manual pages. In particular I am unable to understand how to get a forumula which is the first argument to the glmrob function.

@cardinal has telegraphed an answer in comments. Let’s flesh it out. His point is that although general linear models (such as implemented by lm and, in this case, glmRob) appear intended to evaluate relationships among variables, they can be powerful tools for studying a single variable, too. The trick relies on the fact that regressing data against a constant is just another way of estimating its average value (“location”).

As an example, generate some Poisson-distributed data:

The result, 2.0685, is comfortably close to 2: the procedure seems to work. To see what it is doing, plot the data: 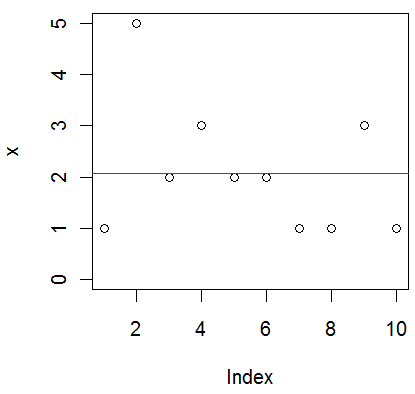 The fitted line is purely horizontal and therefore estimates the middle of the vertical values: our data. That’s all that’s going on.

To check robustness, let’s create a bad outlier by tacking a few zeros onto the first value of x:

This time, for greater flexibility in post-processing, we will save the output of glmRob:

To obtain the estimated average we can request

The value this time equals 2.496: a little off, but not too far off, given that the average value of x (obtained as mean(x)) is 12. That is the sense in which this procedure is “robust.” More information can be obtained via

Its output shows us, among other things, that the weight associated with the outlying value of 100 in x[1] is just 0.02179, almost 0, pinpointing the suspected outlier.