I have a data set which displays a bimodal distribution. This was determined by plotting a histogram of the frequency vs number.

I now need to separate the two original populations and therefore find an intersection point of sorts. From the plot it looks like the point might be approx. -1.0 to -0.8.

Is there a straight forward calculation or function that I can use to locate this point more accurately? 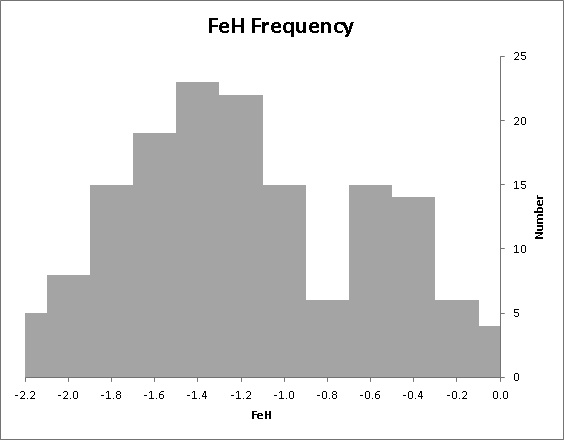 Actually that algorithm sounds like it is using precisely the methodology that Macro was suggesting. The idea is that you have a distribution F(x)=pF1(x)+(1−p)F2(x) where F1 and F2 are specified up to a few parameters that are estimated from the data. In your case F1 and F2 are both Gaussian and there would be 5 parameters to estimate from the data, p, σ_1, σ_2, μ_1, and μ_2 the mixture proportion and the standard deviations and means respectively for the distributions F_1 and F_2. There is actually no unique separation point since the distributions overlap. But the algorithm probably picks the crossing point for the densities. Since these are Gaussian distributions there will only be one unless one has a very large variance compared to the other. Without knowing the algorithm, I wouldn’t know how many of these parameters are estimated. For example both standard deviations could be estimated or they could be assumed equal and only a pooled standard deviation would be estimated. 5 parameters estimated in the first case and 4 in the second. After the parameters of F_1 and F_2 are estimated you use the distributions specified by the estimates to calculate the crossing point.