Where, we use the dataset College, that can be found inside the package ISLR.
Now, if we find the summary of this fit, then we can see that:

This question arose due to the (d) part of this answer, for the question 10, chapter 7 of Introduction of statistical Learning.

The way the output of this approach to fitting GAMs is structured is to group the linear parts of the smoothers in with the other parametric terms. Notice Private has an entry in the first table but it’s entry is empty in the second. This is because Private is a strictly parametric term; it is a factor variable and hence is associated with an estimated parameter which represents the effect of Private. The reason the smooth terms are separated into two types of effect is that this output allows you to decide if a smooth term has

Entries here are like what you’d get if you fitted this a linear model and computed the ANOVA table, except no estimates for any associated model coefficients are shown. Instead of estimated coefficients and standard errors, and associated t or Wald tests, the amount of variance explained (in terms of sums of squares) is shown alongside F tests. As with other regression models fitted with multiple covariates (or functions of covariates), the entries in the table are conditional upon the other terms/functions in the model.

However, a lot of this might depend on the fact that many smooths were only allowed to use 2 degrees of freedom; why 2?

Newer approaches to fitting GAMs would choose the degree of smoothness for you via automatic smoothness selection approaches such as the penalised spline approach of Simon Wood as implemented in recommended package mgcv:

The model summary is more concise and directly considers the smooth function as a whole rather than as a linear (parametric) and nonlinear (nonparametric) contributions:

Now the output gathers the smooth terms and the parametric terms into separate tables, with the latter getting a more familiar output similar to that of a linear model. The smooth terms entire effect is shown in the lower table. These aren’t the same tests as for the gam::gam model you show; they are tests against the null hypothesis that the smooth effect is a flat, horizontal line, a null effect or showing zero effect. The alternative is that the true nonlinear effect is different from zero.

Notice that the EDFs are all larger than 2 except for s(perc.alumni), suggesting that the gam::gam model may be a little restrictive.

The fitted smooths for comparison are given by 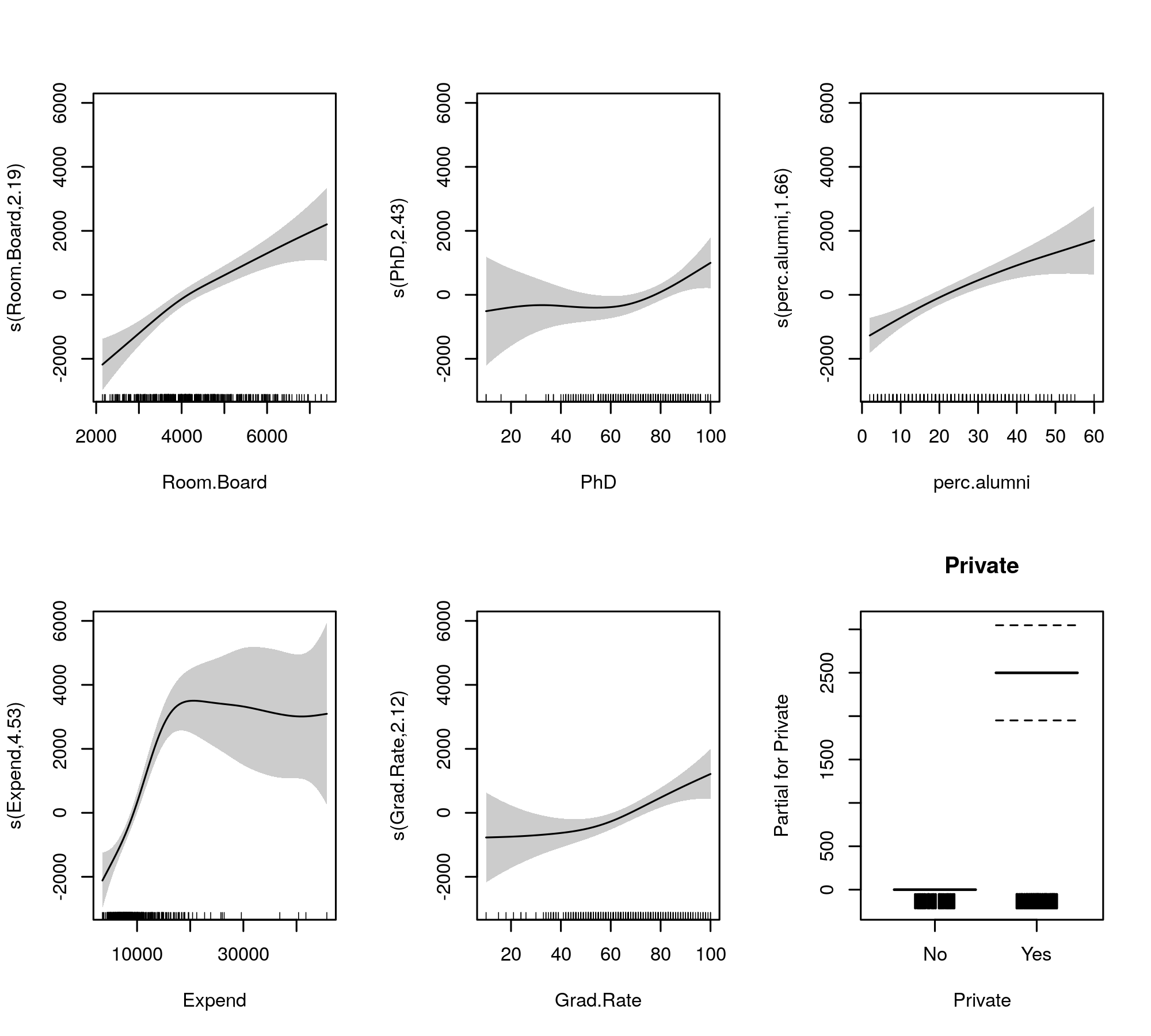 The automatic smoothness selection can also be co-opted to shrinking terms out of the model entirely:

Having done that, we see that the model fit has not really changed

All of the smooths seem to suggest slightly nonlinear effects even after we’ve shrunk the linear and nonlinear parts of the splines.

Personally, I find the output from mgcv easier to interpret, and because it has been shown that the automatic smoothness selection methods will tend to fit a linear effect if that is supported by the data.