Forgive me if this is outside of the scope of Cross Validated, but it seemed relevant on the visualization front. As described here (page 3) there exists a phenomenon when gauging the distance between two lines on a plot to compare the shortest distance between the two lines, rather than the vertical distance. This leads to underestimation of the distance between lines at certain gradients. To illustrate, the following graphic is from the aforementioned link: 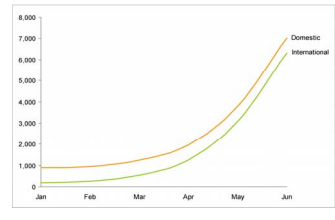 The difference on the y-axis between these two lines is uniform across all x values, and yet the difference appears to shrink. I am curious as to whether this phenomenon has an official name and if so, whether there is any kind of canonical reference paper/citation describing the phenomenon in more detail?

This psycho-visual problem is the consequence of the mind making effective bisquare approximations when thinking about “distance”. It is most often addressed by plotting the variable of interest, in this case the difference, as its own variable. Personally I would put this into a subplot with y-axis label as “difference between domestic and international” or such.