I want to include time spent doing something (weeks breastfeeding, for example) as an independent variable in a linear model. However, some observations do not engage in the behavior at all. Coding them as 0 isn’t really right, because 0 is qualitatively different from any value >0 (i.e. women who don’t breastfeed may be very different from women who do, even those who don’t do it for very long). The best I can come up with is a set of dummies that categorizes the time spent, but this is a waste of precious information. Something like zero-inflated Poisson also seems like a possibility, but I can’t exactly figure out what that would look like in this context. Does anyone have any suggestions?

To expand a bit on the answer of @ken-butler. By adding both the continuous variable (hours) and an indicator variable for a special value (hours = 0, or non-breastfeeding), you think that there is a linear effect for the “non-special” value and a discrete jump in the predicted outcome at the special value. It helps (for me at least) to look at a graph. In the example below we model hourly wage as a function of hours per week that the respondents (all females) work, and we think that there is something special about “the standard” 40 hours per week: 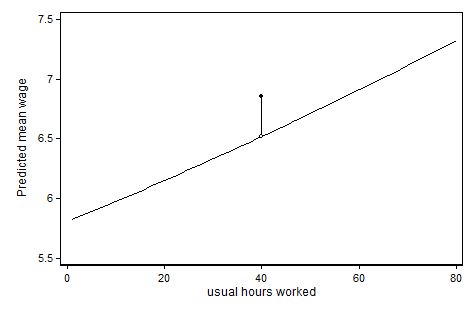 The code that produced this graph (in Stata) can be found here: http://www.stata.com/statalist/archive/2013-03/msg00088.html

So in this case we have assigned the continuous variable a value 40 even though we wanted it to be treated differently from the other values. Similarly, you would give your weeks breastfeeding the value 0 even though you think it is qualitatively different from the other values. I interpret your comment below that you think that this is a problem. This is not the case and you do not need to add an interaction term. In fact, that interaction term will be dropped due to perfect collinearity if you tried. This is not a limitation, it just tells you that the interaction terms does not add any new information.

Consider what happens when someone is breastfeeding. The regression equation simplifies to:

So $\beta_1$ is just a linear effect of the number of weeks breastfeeding for those that do breastfeed.

Consider what is hapening when someone is not breastfeeding: