I am trying to understand the d-Separation logic in Causal Bayesian Networks. I know how the algorithm works, but I don’t exactly understand why the “flow of information” works as stated in the algorithm. 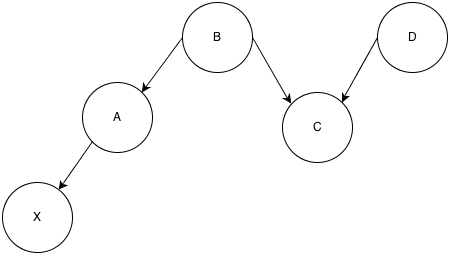 For example in the graph above, lets think that we are only given X and no other variable has been observed. Then according to the rules of d-separation, the information flow from X to D:

Well, up to this point, everything is OK for me since the flow of the information occurs according to intuitive cause-effect relationships. But I don’t get the special behavior of so called “V-structures” or “Colliders” in this scheme. According to the d-Separation theory, B and D are the common causes of C in the graph above and it says that if we did not observe C or any of its descendants, the flow information from X is blocked at C. Well, OK, but my question is why?

From the three steps above, started from X, we saw that C is influenced by our knowledge about X and the information flow occurred according to the cause-effect relationship. The d-Separation theory says that we cannot go from C to D since C is not observed. But I think that since we know that C is biased and D is a cause of C, D should be affected as well while the theory says the opposite. I am clearly missing something in my thinking pattern but can’t see what it is.

So I need an explanation of why the flow of information blocked at C, if C is not observed.

Is it not intuitive that you cannot reason from cause to unobserved effect to another cause? If the rain (B) and the sprinkler (D) are causes of the wet ground (C), then can you argue that seeing rain implies that the ground is probably wet, and continue to reason that the sprinkler must be on since the ground is wet?! Of course not. You argued that the ground was wet because of the rain — you can’t look for additional causes!

If you observe the wet ground, of course the situation changes. Now you may be able to reason from one cause to the other as Frank explains.