In a sandbox I had the current production release v1.14 of a managed package installed.

After it was tested successfully a v1.15 release managed package was created with exactly the same content as the v1.15 (Beta 1) package.

When I tried to install the release v1.15 managed package in the sandbox I got the following package installer error:

Package You cannot upgrade a beta package,
because developers can make incompatible changes to a package that has
been released as a beta. To install a newer version of the package,
you must first uninstall the existing version.

I’d like to avoid downloading the automatically generated export file with the current package data. Then having to start from scratch reinstalling the latest managed package and then pushing the old data back in. In a full Org this wouldn’t be such an issue as the process is automated, but a sandbox with limited storage is more time consuming due to the relationships that need to be maintained when putting the data in manually.

A quick search indicates I may have inflicted more work on myself by using the Beta managed package in this sandbox.

“Beta packages are not upgradeable”. Reference How to upgrade a managed package

Argh! This goes from bad to worse. Because there are a number (87!) of customizations in the sandbox with dependencies on the managed package I’ll need to remove them first or the package uninstall process fails. 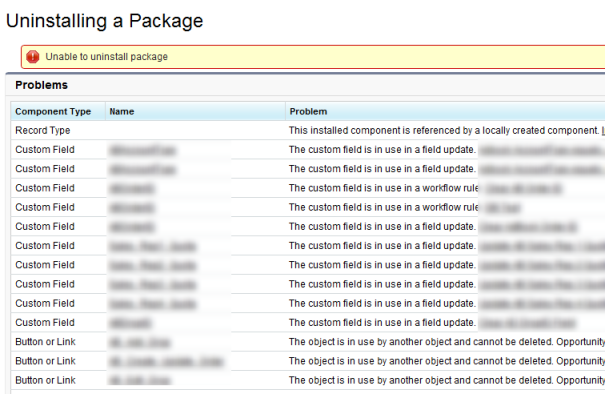 Unfortunately, you have your answer right there, beta packages can’t be upgraded.

However, if your data structure has changed very much between versions this might not be helpful, and you should review the data you get BEFORE you uninstall.