I am currently analyzing large data sets with various characteristics (such as city). I wanted to find a measure which would essentially say how much or how little of a variance there was across the data. This would be much more useful than simply getting a count of the number of distinct elements.

For example, consider the following data:

I wanted to get an opinion on what similar formulas and areas of study there are. I really could not find anything with a few quick Google searches.

I think what you probably want is (Shannon’s) entropy. It is calculated like this:
H(x)=−∑xip(xi)log2p(xi)
This represents a way of thinking about the amount of information in a categorical variable.

In R, we can calculate this as follows:

From this, we can see that the length of the vector doesn’t matter. The number of possible options (‘levels’ of a categorical variable) makes it increase. If there were only one possibility, the value is 0 (as low as you can get). The value is largest, for any given number of possibilities when the probabilities are equal.

Somewhat more technically, with more possible options, it takes more information to represent the variable while minimizing error. With only one option, there is no information in your variable. Even with more options, but where almost all actual instances are a particular level, there is very little information; after all, you can just guess “Moscow” and nearly always be right.

Your suggested metric is the sum of squared probabilities. In some ways it behaves similarly (e.g., notice that it is invariant to the length of the variable), but note that it decreases as the number of levels increases or as the variable becomes more imbalanced. It moves inversely to entropy, but the units—size of the increments—differ. Your metric will be bound by 0 and 1, whereas entropy ranges from 0 to infinity. Here is a plot of their relationship: 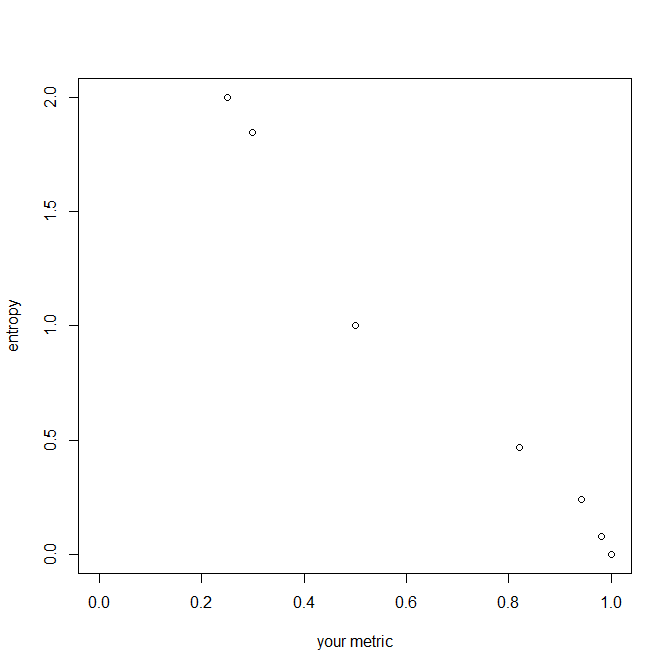