One way to summarize the comparison of two survival curves is to compute the hazard ratio (HR). There are (at least) two methods to compute this value.

Someone sent me an example where the two methods differ by a factor of three. In this particular example, it is obvious that the logrank estimate is sensible, and the Mantel-Haenszel estimate is far off. My question is if anyone has any general advice for when it is best to choose the logrank estimate of the hazard ratio, and when it is best to choose the Mantel-Haenszel estimate? Does it have to do with sample size? Number of ties? Ratio of sample sizes?

I think I figured out the answer (to my own question). If the assumption of proportional hazards is true, the two methods give similar estimates of the hazard ratio. The discrepancy I found in one particular example, I now think, is due to the fact that that assumption is dubious. 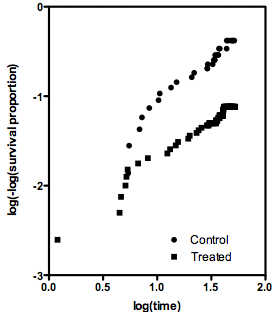 I wonder if the discrepancy between the logrank and Mantel-Haenszel estimates of the hazard ratio can be used as a method to test the assumption of proportional hazards?