What are the standard statistical tests to see if data follows exponential or normal distributions?

It seems that you’re trying to decide whether to model your data using the normal or the exponential distribution. This seems somewhat strange to me, as these distributions are very different from each other. 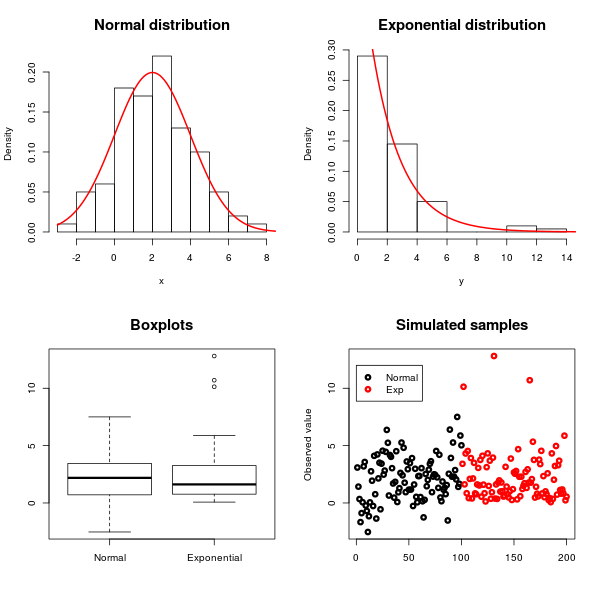 The symmetry of the normal distribution and the skewness of the exponential can be seen using histograms, boxplots and scatterplots, as illustrated in the figure above.

Another very useful tool is a Q-Q-plot. In the example below, the points should approximately follow the line if the sample comes from a normal distribution. As you can see, this is the case for the normal data, but not for the exponential data. 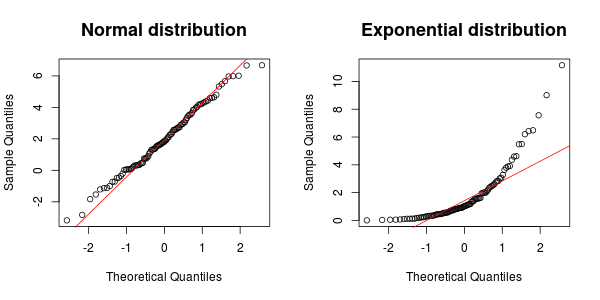 If graphical examination for some reason isn’t enough for you, you can still use a test to determine whether your distribution is normal or exponential. Since the normal distribution is a scale and location family, you’ll want to use a test that is invariant under changes in scale and location (i.e. the result of the test should not change if you change your measurements from inches to centimetres or add +1 to all your observations).

This test is actually a one-sided version of Grubbs’ test for outliers. You’ll find this implemented in most statistical software (but make sure that you use the right version – there are several alternative test statistics used for the outlier test!).

Reference for TE,N being the most powerful test: Section 4.2.4 of Testing for Normality by H.C. Thode.