I’ve read that model parameters become unstable in case of multicollinearity. Can some one give an example situation of this behavior, and explain why this is happening?

Please use the following multiple linear regression for illustration:

Here is an example of this behavior. I’m going to write a function to simulate regressions and output their coefficients. We’ll look at the coordinate pair of coefficients (a1,a2) in the case of no collinearity and high collinearity. Here is some code: 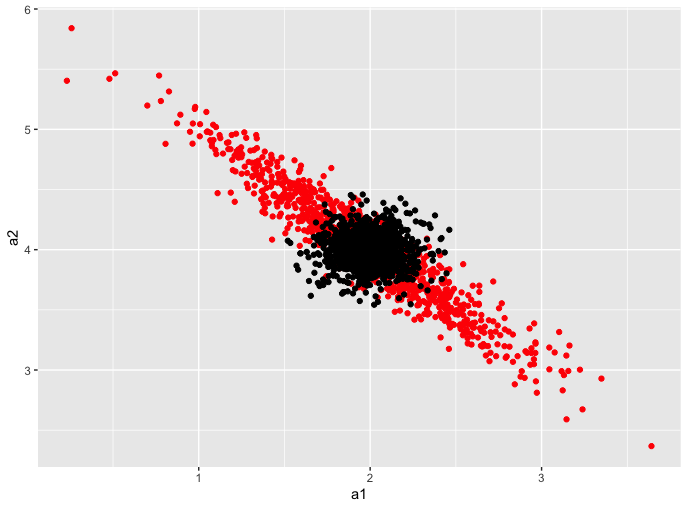 In the case of high collinearity (red dots), the coefficients of the linear model can vary quite a lot! Instability in this case manifests as wildly different coefficient values given the same data generating process.

Why Is This Happening

Let’s take a statistical perspective. The sampling distribution for the coefficients of a linear regression (with enough data) looks like
ˆβ∼N(β,Σ)
The covariance matrix for the above is
Σ=σ2(X′X)−1
Let’s focus for a minute on (X′X). If X has full rank, then (X′X) is a Gram Matrix, which has some special properties. One of those properties is that it has positive eigenvalues. That means we can decompose this matrix product according to eigenvalue decomposition.
(X′X)=QΛQ−1
Suppose now one of the columns of X is highly correlated with another column. Then, one of the eigenvalues of X′X should be close to 0 (I think). Inverting this product gives us
(X′X)−1=Q−1Λ−1Q
Since Λ is a diagonal matrix, Λ−1jj=1Λjj. If one of the eigenvalues is really small, then one of the elements of Λ−1 is really big, and so too is the covariance, leading to this instability in the coefficients.

I think I got that right, it has been a long time since I’ve done linear algebra.