Apart from Wave, the biggest announcement from a developer perspective at Dreamforce 2014 is “Lightning” and it will be announced in the big keynote by Marc Benioff today. I’ve started to play around with it a bit and I’m really trying to understand the differences/ value propositions between Lightning and Aura. Apart from the Drag and Drop builder (which usually advanced developers are not a fan of)

I am sure there’d be more clarity around Lightning in future but just trying to get some early understanding.

First off: “Lightning” is a larger (marketing) effort to rebrand existing and new Salesforce1 platform services under one shiny new umbrella. “Salesforce1 Lightning” consists of the following pieces, among others:

What you’re asking about, though, is really Lightning Components (LC) and the Lightning App Builder (LAB).

As you’ve surmised, Lightning Components are essentially a rebranding of “Aura on the Platform” (AOTP), an initiative that’s been going on within Salesforce for several years. Aura began as an internal initiative at Salesforce to build a scalable, component-based user interface framework, and earlier this year, Salesforce open-sourced the Aura Framework (available at http://documentation.auraframework.org/auradocs# and https://github.com/forcedotcom/aura). But as you mentioned, Salesforce1 is built using Aura Components, as are many newer components in various parts of the Salesforce UI (e.g. the Chatter Feed — just Inspect Element on a page with the Chatter Feed or in the Service Cloud Console and you’ll see Aura script libraries pulled in and attributes on elements).

Lightning Components are Aura Components — if you go to create a new “Lightning Component”, the actual markup you use is <aura:component>, and a lot of the core XML tags available from Aura, e.g. <aura:iteration>, <aura:if>, etc. are prefixed with aura and will remain that way.

Re #1) The goal of the Lightning App Builder, long term, yes, is to provide an admin-friendly way to construct apps by assembling and configuring Lightning Components.

Lightning Applications are intended to be top-level, standalone entry points to distinct “apps”. For example, Salesforce1 is a Lightning Application. Its Namespace Prefix is “one”, and the App is called “one”, thus it is available at /one/one.app , but Lightning Apps that you create can be accessed via the syntax /MY_NAMESPACE/MY_APP_NAME.app, e.g. in one of our orgs, our “Product Catalog” app is accessible via /sk_aura/ProductCatalogApp.app , and it looks something like this: 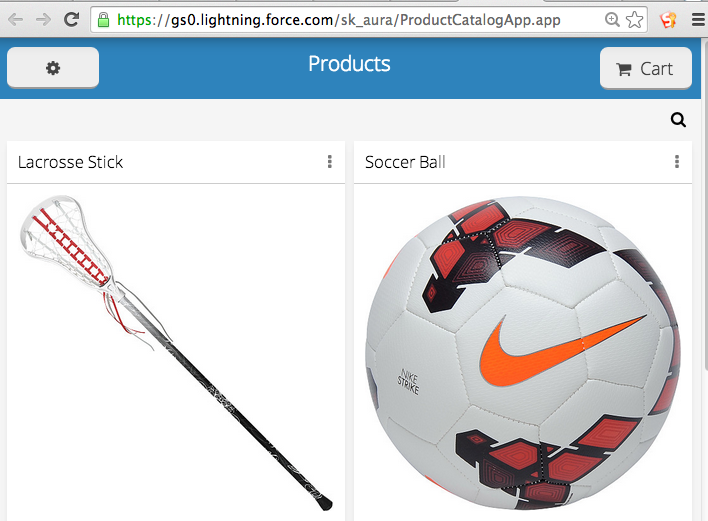 In general, Lightning Components are intended to be used to:

As of right now (Winter 15), Lightning Components can be used in the following specific ways: