For example, if my table is:

In the general case: you can’t

The ROC curve shows how sensitivity and specificity varies at every possible threshold. A contingency table has been calculated at a single threshold and information about other thresholds has been lost. Therefore you can’t calculate the ROC curve from this summarized data.

But my classifier is binary, so I have one single threshold

Binary classifiers aren’t really binary. Even though they may expose only a final binary decision, all the classifiers I know rely on some quantitative estimate under the hood.

This will give you more freedom to choose the optimal threshold to get to the best possible classification for your needs.

But I really want to

You really shouldn’t. ROC curves with few thresholds significantly underestimate the true area under the curve (1). A ROC curve with a single point is a worst-case scenario, and any comparison with a continuous classifier will be inaccurate and misleading.

Just give me the answer!

Ok, ok, you win. With a single point we can consider the AUC as the sum of two triangles T and U: 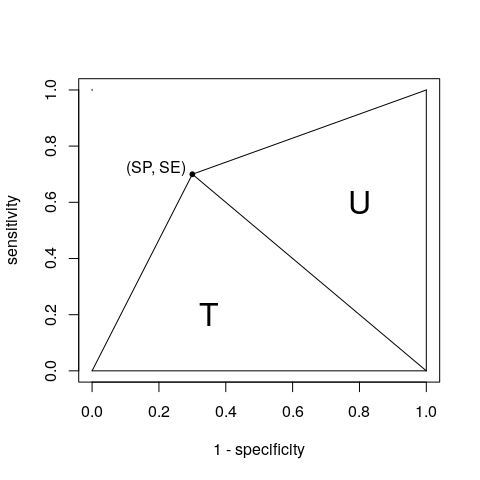 We can get their areas based on the contingency table (A, B, C and D as you defined):

You can technically calculate a ROC AUC for a binary classifier from the confusion matrix. But just in case I wasn’t clear, let me repeat one last time: DON’T DO IT!