I want to test a sample correlation $r$ for significance, using p-values, that is

and finding the p-value by

My question is: how large $n$ should be for this to be an appropriate transformation? Obviously, $n$ must be larger than 3. My textbook does not mention any restrictions, but on slide 29 of this presentation it says that $n$ must be larger than 10. For the data I will be considering, I will have something like $5 \leq n \leq 10$.

For questions like these I would just run a simulation and see if the $p$-values behave as I expect them to. The $p$-value is the probability of randomly drawing a sample that deviates at least as much from the null-hypothesis as the data you observed if the null-hypothesis is true. So if we had many such samples, and one of them had a $p$-value of .04 then we would expect 4% of those samples to have a value less than .04. The same is true for all other possible $p$-values.

Below is a simulation in Stata. The graphs check whether the $p$-values measure what they are supposed to measure, that is, they shows how much the proportion of samples with $p$-values less than the nominal $p$-value deviates from the nominal $p$-value. As you can see that test is somewhat problematic with such small number of observations. Whether or not it is too problematic for your research is your judgement call. 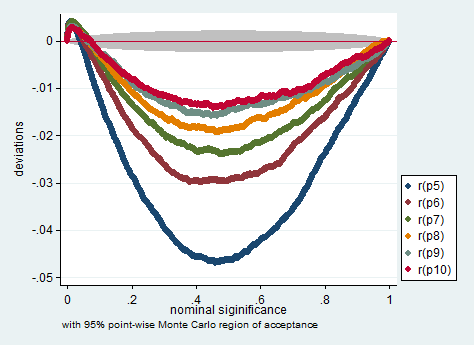 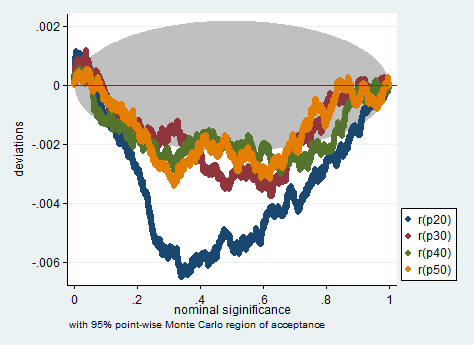