I am working on an integration that will authenticate with a token. I need to pass it via header as follows:

I also need to merge some data into the endpoint. I have considered the following options for storage of the token(s):

My main question is if it is possible/reasonable to use Named Credentials to store tokens.

Simple, lightweight, and flexible, this approach is the easiest to get off the ground.

If encryption of the token is critical, we could roll out a Custom Object to store our tokens. This seems like a really ham-handed approach and I would like to avoid it if at all possible

This option doesn’t really seem to have any advantages over using a Custom Setting or Custom Object.

This option seems really promising, but based on my reading so far, it’s not clear to me if it has the flexibility I need. After navigating to Setup > Administration > Security Controls > Named Credentials and clicking on the New Named Credential button, I got this screen: 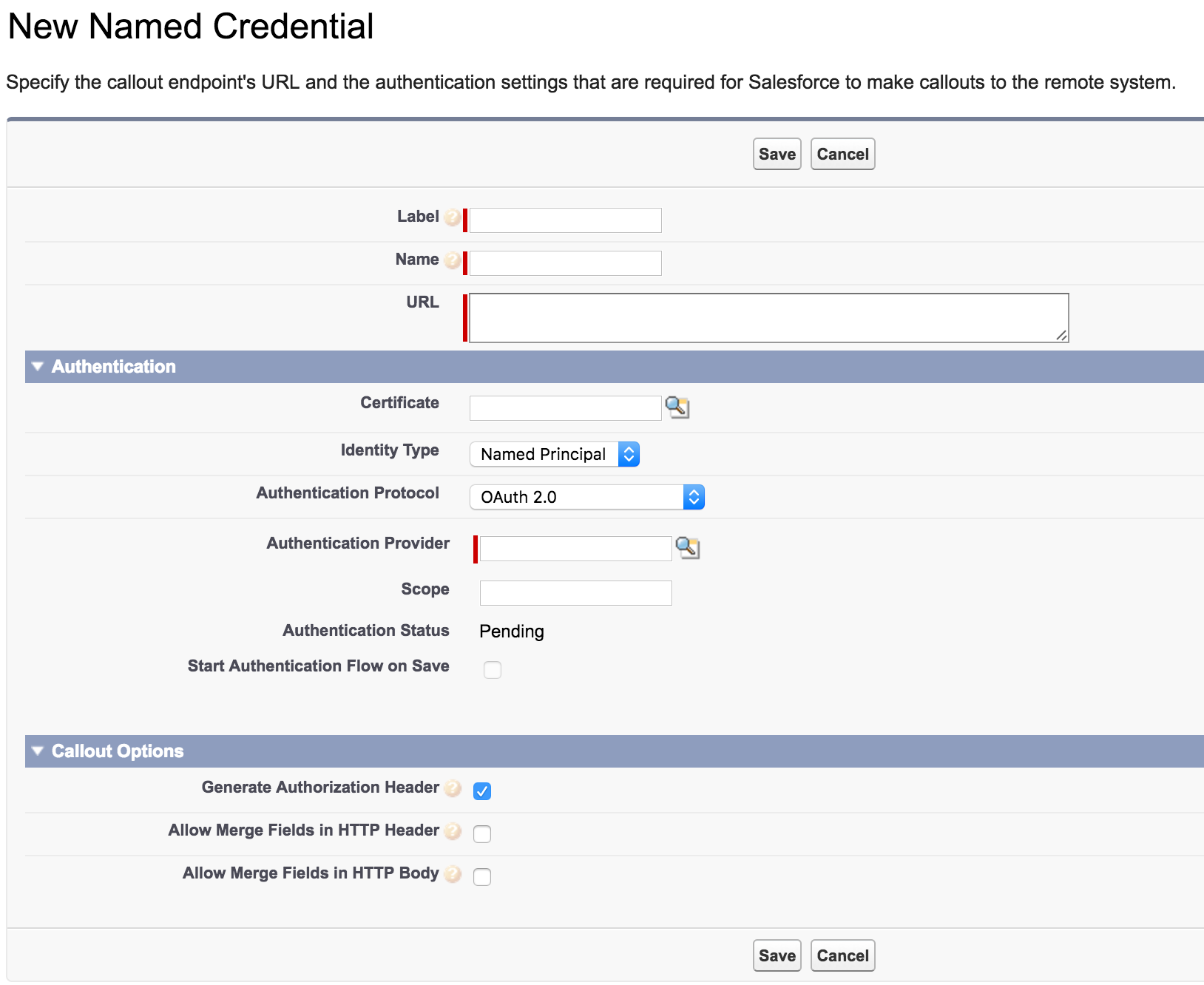 I found an article that purports to describe how to Create a Custom External Authentication Provider, but its description of how to navigate to the setup is outdated. It recommends:

There’s no such item in my setup menu. The closest I could find was Identity Provider, which requires me to set up My Domain before I can use it. This option seems like it has way more side effects than I would like.

Your assessments are pretty close, but you’ve got some glaring errors I’d like to bring up.

You can encrypt the token using the Crypto class if you need to. Just because it doesn’t support the Text (Encrypted) data type doesn’t mean it’s impossible.

In addition to the same comment about Custom Settings, Custom Metadata does require a query, but these queries do not count against governor limits at all (SOQL row/query limits do not increment). The major con that you missed, though, is that you cannot update a Custom Metadata entry via Apex Code directly, but instead have to leverage a metadata API call instead. This makes it non-trivial to implement in Apex Code/Visualforce/Lightning because of the extra hoops for simply storing a token.

Can Named Credentials be used to support token based authentication?

Yes, that’s one of the primary benefits of using Named Credentials.

Is it necessary to set up My Domain in order to do so?

No, I just set up a Facebook OAuth2 connection in a dev org without My Domain configured, so it’s clearly not necessary.

Is there really any worry about standard users seeing the token values?

Technically, you should treat the token the same as a password. That said, most users in your system wouldn’t know what to do with a token if you told them how to use it, the few that do are probably developers that need to be trusted with these tokens anyways, and anyone that intends harm shouldn’t even be an employee, much less someone that can log in with enough permission to see the token.

Is there any benefit to encrypting the token?

In a typical org, there’s little need to encrypt the token. As a bonus, Named Credentials seems to store the token in a place that can’t be accessed even by admins (not that I could see anywhere), so using NC limits interactions to just programmed interactions and, for developers and admins, execute anonymous scripts. I would personally recommend NC as the preferred form of authentication.

Named Credentials are purpose-built for OAuth authentication, and should be the preferred means of doing so over all other means. The other techniques exist primarily because they were invented by thousands of developers independently, which salesforce.com obviously noticed, and decided to provide a standardized interface for us to use.