Let’s say we have the input (predictor) and output (response) data points A, B, C, D, E and we want to fit a line through the points. This is a simple problem to illustrate the question, but can be extended to higher dimensions as well. 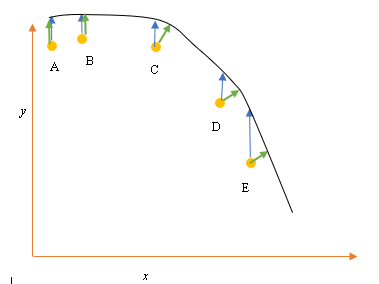 The green arrow (→) is drawn such that it is perpendicular to the current hypothesis at the point of intersection, and thus represents the least distance between the data point and the current hypothesis.
For points A and B, a line drawn such that it is vertical to the current best guess and is similar to a line which is vertical to the x axis. For these two points, the blue and the green lines overlap, but they don’t for points C, D and E.

The least squares principle defines the cost function for linear regression by drawing a vertical line through the data points (A, B, C, D or E) to the estimated hypothesis (→), at any given training cycle, and is represented by

The minimum distance between a point (A, B, C, D or E) is represented by a perpendicular line drawn from that point on to the current best guess (green arrows).

In practice, the great drawback of this procedure is that the ratio of the error variances is not usually known and cannot usually be estimated, so the path forward is not clear.