My short answer is that it is by design. The skewness measures are usually constructed so that the positive skewness indicates right-skewed distributions.

Today the most common measure of skewness, that is also usually taught in schools, is based on the third central moment equation as follows:

Look at the expression above. When there’s more weight (of the distribution function) to the right of the mean then (x−μ)3 will contribute more positive values. The right of the mean is positive, because x>μ and the left is negative because x<μ. So, mechanically it would seem to answer exactly your question.

However, as @Nick Cox brought up, there is more than one measure of skewness, such as Pearson's first coefficient of skewness, which is based on the difference mean−mode. Potentially, different measures of skewness could lead to different relations between positive skewness and the tendency to have heavier tails on the right.

Hence, it is interesting to look at why these measures of skewness were introduced in the first place, and why do they have their particular formulations.

In this context it is useful to look at the exposition of skewness by Yule in An Introduction to the Theory of Statistics (1912). In the following excerpt he describes the desired properties of a reasonable skewness measure. Basically, he requires that the positive skewness should correspond to right skewed distributions, like in your picture: 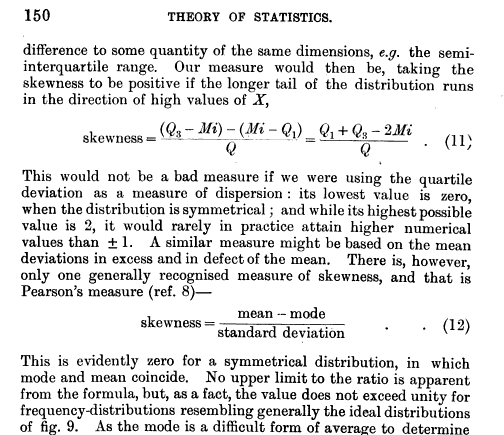